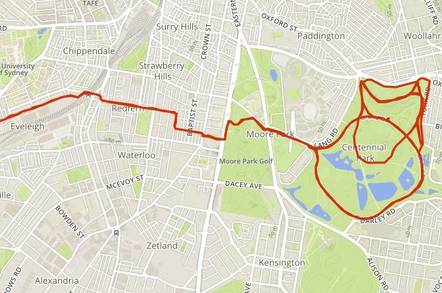 A slice of your correspondent's Saturday ride

A few weeks ago, Huawei asked if I'd like to take its new P8 flagship smartmobe for a spin. Which is why I found myself with two Android smartphones in my pocket just before I hopped on my bicycle to ride home from work.

Before I braved the traffic, I wondered if different phones running the same cycle-tracking app might produce different results. So I installed Strava on the P8, recorded the ride on it and my Galaxy S6 Edge and got a result: the two phones were out by 15 metres of climbing and 100m of distance.

Some of my commute goes through the concrete canyons of Sydney's central business district and GPS devices always struggle there: records of my rides regularly have me veering across roads or mounting the pavement and riding through shops or offices, so I didn't think much of the discrepancies.

I also wondered if perhaps placement of the phones might be the culprit, because one sat in the mid-thigh pocket of the baggy mountain bike shorts I wear when riding to work (it's important not to shock co-workers with skin-tight lycra).

The other phone went in a pocket at the rear of my cycling jersey. I figured that all that leg-pumping might have upset the phone in the thigh pocket.

But the discrepancies still bothered me, so I resolved to make the same experiment on a ride in the open air around Sydney's Centennial Park.

On that ride I used the S6, the P8, and also a Garmin Edge 705 cycling computer. Each device scored one of the three pockets in the back of my club jersey. I couldn't turn them on and off simultaneously, but started and stopped each within seconds of the others.

Here are the results:

You'll have noticed pronounced discrepancies there, especially in the climbing data. For what it's worth, the Garmin's climbing figure was over 900m until Garmin's Connect service applied its correction algorithm. The key difference appears to be each device's interpretation of movement. Perhaps I'm just so slow that the Garmin and the Huawei don't rate me as really moving, but the S6 is kinder at slower speeds?

I've two hypotheses about the discrepancies.

One is that different hardware produces different results, which should come as no surprise. Mobe-makers can choose between different components, incorporate them into their kit in different ways and treat them differently in software. All or any of which would explain differences.

But I don't think that's the cause of the differences. Instead, I think that different online services are using different altitude databases. To test that theory I went back to Strava, downloaded the ride data from the Huawei P8 and imported it to Garmin Connect.

Next page: Curiouser and curiouser
Page:
Tips and corrections
38 Comments