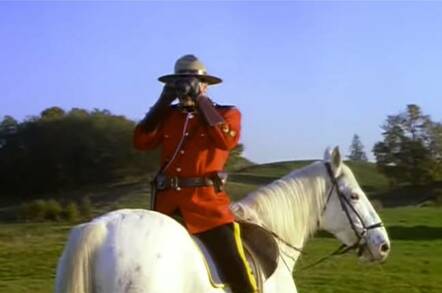 The Royal Canadian Mounted Police (RCMP) has armed itself with rifles and tasers to confront a man who appeared to have a handgun in his belt.

According to The Globe and Mail, the “gun” was actually an iPhone case, probably of the sort US authorities have warned against using on the ground that they're stupid and dangerous.

The Globe's report says the case was “tucked in the waistband of the man’s shorts on Sunday while he was at Grand Beach north of Winnipeg.”

Sgt. Bert Paquet told the paper that “While the individual knew this item to be a fake gun, our officers did not.” Said officers therefore approached the man with a rifle and taser to hand.

The man reportedly handed over the case “voluntarily” so that the RCMP can dispose of it.

The RCMP is asking other Canadians not to be so stupid as to purchase the case.

“Some people do not realize the risks associated with openly carrying or displaying these replicas in a public space,” Sgt. Paquet reportedly said. “Anyone who owns this type or similar devices should safely dispose of them immediately.” ®