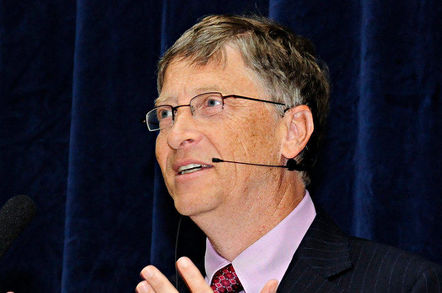 Gulp: The man himself has supped his creation – and hasn't dropped dead

William Henry “Bill” Gates III – Harvard drop-out, Microsoft founder, and second richest man in the world – has revealed that his latest invention will burn your rubbish as well as turning your turds into fresh drinking water.

Gates, who remains a technology advisor at the Windows factory, wrote about his poo-changing machine, which is part of his efforts to mitigate the difficulties faced by the world's poorest inhabitants.

The Janicki Omni Processor (JOP), which produced the juice, is one of several processors being developed on Gates' dime to turn human waste into something of value, in this case, drinking water, electricity, and ash.

Applauding his partners, Janicki Bioenergy, Gates now thinks the biggest engineering challenges have been solved, and the "next version of the machine will burn most types of garbage in addition to human waste, and it will be easier to maintain".

The trial run of the JOP in Dakar, Senegal, will see the real-world variables of personnel, government, and public reaction, tested in the field.

Gates notes that while "it's tempting to focus on the drinking water, for obvious reasons ... the goal is not to provide water" [but instead] to dramatically improve sanitation for all the cities in poor countries".

The committed philanthropist noted that more than two billion humans are using unsuitable latrines in the world today and states that "diseases caused by poor sanitation kill some 700,000 children every year", adding that:

We put together this slideshow so you can see how the system works in Dakar today and how the JOP fits in.

The idea behind every Omni Processor design is to solve this problem by making sanitation affordable for the poor.

Students escape, but the rest of us have to wait for details

Microsoft's certification exams: So easy, a child of six could pass them. Literally

And he had points to spare. But don't cry, MSCE folk...

Azure certifications are awful, Microsoft admits, so it has made new ones