Typewriters suck. Yet we're infinitely richer for those irritating machines

The invention of backspace made us all better off. Right? 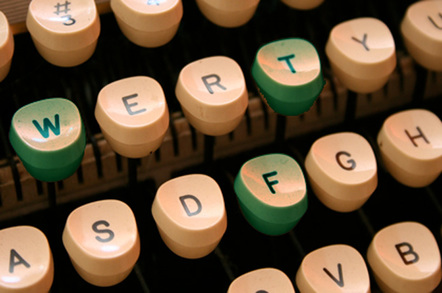 Typewriter: A glowing symbol of economic prosperity and progress

Worstall on Wednesday One of the things we greybeards have a seriously difficult time getting over to the youngsters is quite how much life sucked back in the old days. It's easy enough to look at the bald economic statistics and see that incomes haven't moved up much (for the UK) or even at all (for the US) in recent decades.

Yet when anyone who has been an adult for a few decades thinks back to those days of their childhood, it is simply quite obviously not true that the average lifestyle hasn't improved.

A standard part of a middle class British lifestyle in the 1960s would be ice forming on the inside of the bedroom window overnight. Anyone keeping a house that cold these days would be accused of child abuse: they're most certainly defined as being in fuel poverty.

At which point I find that I really like OverType, a typewriter simulator. Yes, yes, I know there's many of them about but this one seems to manage to pack in most of the real frustrations of having to use a mechanical typewriter. You can't press two keys at the same time (mechanical keyboards would jam) or even press them too quickly. It randomly runs out of ribbon, there's no set line length, and there's definitely no kerning, which all of these programs imitate.

But the one single feature of a computer keyboard which a modern typist will miss most is the backspace button. On a typewriter this didn't erase your errors, it just took you back so you could type over them again.

All in all, it's a rather fun reminder of just how bad things were (OK, not bad, just less good than now). And there's two eonomic points that flow from this fairly trivial observation.

The first is that we do try to include the benefits of these sorts of things in our inflation numbers. We use something called “hedonic adjustment” to try to deal with the increasing quality of things over time. There's a statistician somewhere who tries to work out how much better a quad-core Intelwhatevergenerationwe'reatnow is than an i486 was. Using the resulting numbers, the stats bods then adjust the inflation numbers to show that while computers have got cheaper, they've also got vastly better.

The general suspicion within the economics profession is that those hedonic improvements haven't been quite captured properly; that incomes are higher than the basic numbers show them to be and that incomes have in fact advanced. But that then just sends the catfight one more iteration away, to how much better?

Next page: Expert: a has-been drip under pressure? More like a Luddite
Page:
Tips and corrections
113 Comments