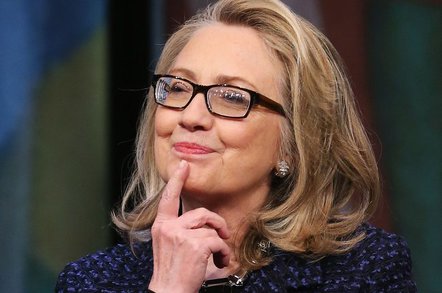 Hillary Clinton's personal email server and one of her thumb drives held emails containing classified and top-secret information. That's according to a note by the US Intelligence Community Inspector General.

While US Secretary of State, Clinton had access to American intelligence. It appears some of Uncle Sam's sensitive documents made their way into her private unclassified system – which would be a breach of procedure, and a gift for her political opponents.

In response to requests from congresscritters, the Inspector General's office examined her server and USB drive, and discovered [PDF] two emails that contained information marked top secret. (Four million Americans are cleared to view such documents.)

Specifically, the messages contained information up to TS//SI/TK//NOFORN: top-secret special-intelligence (SIGINT) via TALENT KEYHOLE (a top-level information control system) with strictly no access to foreigners.

Two more emails in her private cache had classified State Department data in them.

The email server and the thumb drive have now been handed over to the FBI for inspection. Clinton, a Democrat US presidential wannabe, hasn't commented, and both her personal and campaign Twitter feeds are silent on the matter.

Through his office, Senator Chuck Grassley (R-IA), who is among the Members of Congress who have been pressing for more information on the matter, said in a statement that he was disappointed in the intelligence community's handling of it so far:

I appreciate the Intelligence Community Inspector General providing more information in response to the questions that many members of Congress and the public have regarding the classified emails that were on former Secretary of State Clinton’s private server and on a thumb drive with her private attorney. This information revealed by the inspector general makes it even more important that the FBI and the State Department secure these documents. To date, the two agencies most critical to securing this information have failed to assure the American people that they are taking the necessary steps to protect America's national security interests.

If the FBI investigation shows that there really are only four emails that contained classified information, however, it's a bit of an own goal for the politicians and media outlets that are making a big fuss of this. Still, further investigation may yet turn up more emails where they shouldn't be.

What punishment Hillary might face is uncertain. Spreading around classified information can earn you a variety of sentences. Chelsea Manning got 35 years for it, while former CIA chief David Petraeus got off with a mere two years' probation and a $100,000 fine. ®