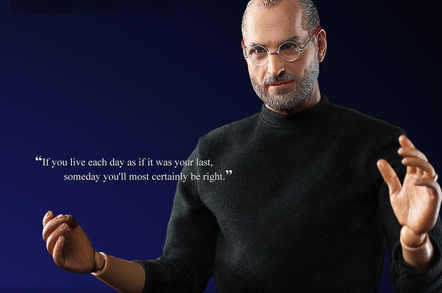 We think that's a plastic doll, rather than the actual Jobs

An opera about Steve Jobs will be premiering in 2017, titled The (R)evolution of Steve Jobs.

Sante Fe Opera has commissioned the work, which "examines the life of one of the most fascinating figures of our time; an innovator who simplified communication with sleek devices, but who paradoxically learned that complex human relationships require more than one button to work."

The most recent attempt to examine the cult surrounding the consumer electronics messiah will be a non-linear exploration of Jobs' life and difficult personal relationships, in song.

Opening with a contemplation of Jobs' own mortality, the Opera will "circle back to the events and people in his past that shaped and inspired him."

The most notable of these events and people seem to be his father Paul, his non-theistic religion and philosophy of choice in Zen Buddhism, and his relationship with Christine Brennan and their daughter Lisa, whom he initially disowned.

The opera apparently "seeks to capture the buzzing creative realm of Silicon Valley with a kinetic electro-acoustic score, lush vocal writing, a compelling non-linear narrative, and a production as innovative as the man himself."

We have included a symphony, titled Alternative Energy, by composer Mason Bates below. ®