Not if it's just to dodge some taxes, anyway ... 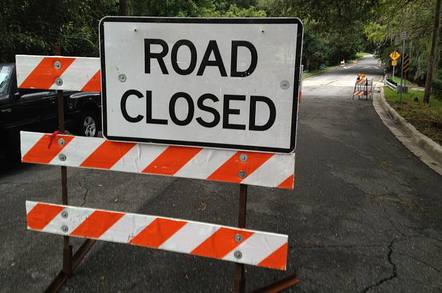 Oi, oldie, get out and walk

Worstall @ the Weekend As the result of a so far successful, but probably not worth it, piece of tax avoidance I can tell you three things. First, something that should be blindingly obvious: middle-aged men can't do long road trips with quite the ease that their younger selves could.

The second is not so much to tell you but ask you: what's the best way of handling a particular piece of road layout? And the third is that there's just not going to be all that much of a problem when the robots come to take all our jobs: yes, I've said that before around here but this is another example.

The tax dodging was that Portugal imposes heavy taxes on cars, based upon engine size. This makes anything large engined, even if second hand, prohibitively expensive: that's the point of it, of course. One of the big Septic 5.7 litre engines would cost above €30,000 to import even if used.

However, there is a loophole. Under the European Union rules you can bring in a car registered elsewhere in the 28-member-state bloc and use it locally for six months. Given that I'm working in the Czech Republic, why not buy there and drive down instead of flying on a regular trip?

So, that's done, 3,080 kilometres (nearly 1,914 miles) were covered in 34 hours with a one hour kip 'round the back of a service station. Something that I'm glad I've done (hey! New experiences!), didn't enjoy doing and probably won't be making a regular feature of my life.

Automotive tax dodging will be done in some other manner ... for a middle aged peep like myself, I really can't quite do this as well as I used to.

Ho hum, Eheu Fugaces, Tempus Fugit and so on.

Which brings me to the question for youse guys. That sort of driving experience does leave a lot of time to think, even a lot of time desperately thinking of something to think of. And I was struck by the manner in which lane merging (hey, 34 hours is a long time!) is done in different countries.

It's been so long since I drove in Britain that I don't actually know how we do it. But it's not unusual that on a road, as it goes up a hill, an extra lane is added. So that slow moving vehicles can be passed by those capable of moving that little bit faster.

Of course, this is simply path dependence. A little like our QWERTY and Dvorak keyboard (and please, let's not get into that argument again). Groups of engineers in different countries looked at the same problem and came up with different solutions. Conceptually there might be no difference between the two practices.