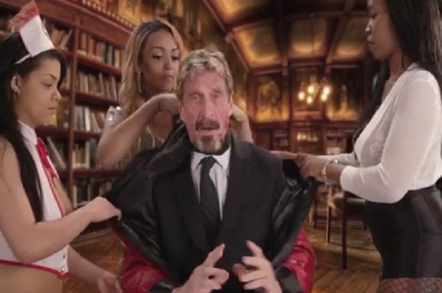 QuoTW It was a week of Firefox flaws, unruly Windows and big game news.

Here were our favorite quotes from the past seven days:

We may have arrived in the Windows 10 era but over in Wales, IT still parties like it's 2001. NHS systems have been found to still be running the ancient operating system Windows XP on their desktops.

Elin Jones, shadow health minister for the Welsh social democratic party had this to say:

Although the health boards have policies in place for upgrading their computers, the figures show in many health boards the security issues caused by continued use of Windows XP have simply not been taken seriously.

Well, at least they're not handling sensitive information, like, say health records ...

Those trying to recoup their lost Bitcoins from MtGox were dealt a blow this week by a Japanese court. Judge Masumi Kurachi said MtGox CEO Mark Karpeles can't be sued because the lost funbux could never actually be owned. The judge said:

it is evident Bitcoins do not possess the properties of tangible entities and acknowledged that they also do not offer exclusive control, because transactions between users are structured in such a way that calls for the involvement of a third party.

Elsewhere this week, Sophos said it was only following the letter of the law when it refused to sell anti-virus software to a man with a Muslim name. Hasan Ali claimed he was blocked from getting the security suite installed on his PC due to his name.

Sophos agreed that he was, well, probably right:

We screen all requests for software downloads in accordance with a number of export lists, such as the US Export Administration Regulations, which affects all companies trading in the US and includes the requirement to ensure that the requester is not included on any US government denied persons list.

Sophos is at pains to point out that it only discriminates in accordance with the law. So that's alright, then.

Meanwhile, yet another Reg reader has claimed a spot on QuoTW – this time with an analysis of Apple Music's slow start.

Maybe -- MAYBE -- Apple Music just fucking sucks and millennials (and their darned digital literacy) can smell it a mile off.

Sticking to the entertainment theme, Malibu Media has been on a lengthy legal campaign over alleged copyright infringement. Now, in an Ohio court case, the company wants to police the terms that others use to describe it. The firm moaned:

Surely the interwebulator will respect such wishes?

Back in Blighty, Brit telly host Noel Edmonds thinks we should all spend a lot more time fighting the real enemy: electro-smog.

The Deal or No Deal star said harmful electro-magnets were to blame for life's ills:

We're surrounded by electro mist, fog and smog. We're covering ourselves in the wrong sorts of electro-magnetism. These idiot politicians who talk about climate change, for goodness' sake, do they really think little us can do anything about it? No, of course not.

He really did spend too much time with Mr Blobby, didn't he?

And since we're on the subject of rich old guys who are most definitely not crazy, one John McAfee has managed to get himself in the news again, this time for being caught driving while whacked out of his gourd on Xanax. But don't worry, folks, old mellow John had a perfectly reasonable explanation:

The shootout with the police was highly exaggerated and in fact no one was even hit by a bullet, let alone harmed by one. The police knew me and I don't believe their hearts were truly in the shootout.

Definitely not crazy. At all. Nope. ®