New court filing says they ALL must go – yes, even the tellies 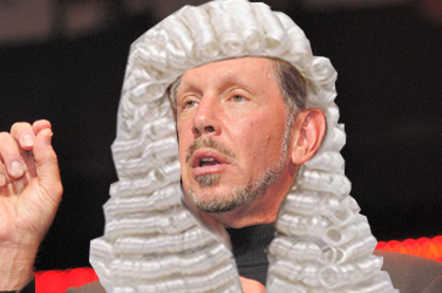 Oracle's lawsuit against Google over Java copyrights probably won't be back in a courtroom again until next year, but in the meantime, Oracle has asked the court to let it expand the scope of its complaint to include events that have occurred since it was first filed in 2010.

What's more, it has once again asked the court to yank infringing Android products from the market, up to and including the most recent devices.

In documents filed with the US District Court of Northern California on Thursday, Oracle asked to file a supplementary complaint that would include more recent versions of Android, including flavors for wearables, cars, TVs, and home appliances.

"Android now has more than a billion monthly users, and its usage continues to grow – meanwhile, it still infringes Oracle's copyrights," the database giant moaned in its filing. "At the same time that Android has become truly ubiquitous, the Java platform has suffered greatly, in large part because Google provides Android to device manufacturers at no charge."

The proposed supplement calls out all six versions of Android released since 2010, from 2.x "Gingerbread" through 5.x "Lollipop," noting that together they comprise some 40 major and minor updates.

It also names Android Wear, Android TV, Android Auto, and appliances that use the OS, such as washing machines and refrigerators.

It even points the finger at the Google Play store, which it observes is one of the ways that Google capitalizes on the Android platform. (At the time the original lawsuit was filed, Google offered a different digital storefront called the Android Market.)

Oracle has argued that all of these Android products and services rely on code that infringes Big Red's Java copyrights, yet Google has intentionally made sure Android apps won't run on a plain-vanilla Java virtual machine:

Google, unlike Oracle, is not dependent upon revenues from the platform itself, because its real goal is to continue capturing search engine advertising revenues. Google is therefore able to offer at no charge what Oracle has worked hard to build and maintain, and in the process to destroy the value of the Java platform in a market that has become the most lucrative of this generation.

Whether Google infringed the Java copyrights is no longer at issue. The US Federal Circuit Appeals Court ruled in May 2014 that it had infringed, overturning the lower court's ruling that software APIs couldn't be copyrighted.

What's left to determine is damages, plus the issue of whether Google's infringement was "fair use," meaning it was the kind that's allowed under copyright law. If the court finds the fair use doctrine applies, Google could end up owing nothing.

What Oracle would really like, however, is to boot Android out of the mobile market – at least until it gets a cut of the profits. Specifically, the database giant wants:

An order permanently enjoining Google, its officers, agents, servants, employees, attorneys and affiliated companies, its assigns and successors in interest, and those persons in active concert and participation with it, from continued acts of infringement of the Java platform copyrights

Google, meanwhile, has been busy trying to whittle away at the amount of damages it might eventually owe. In its own filing on Thursday, it argued that Oracle should not be allowed to raise the issue of whether Google "willfully" infringed its copyrights, saying such arguments are irrelevant to the type of damages being discussed in the case.

As for when Oracle and Google will next trade verbal barbs in a courtroom, it might be some time yet. In July, District Judge William Alsup said his calendar is so full that he won't be able to give them a new hearing until spring of 2016. ®