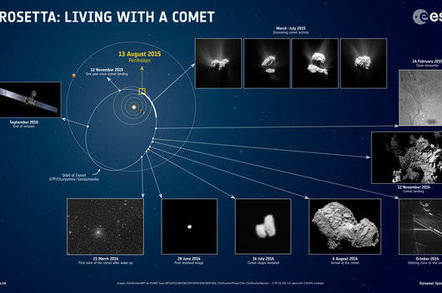 More than a decade after its launch, the spacecraft Rosetta reached Comet 67P/Churyumov-Gerasimenko, and as it approaches perihelion with the Sun, the ESA is celebrating a year since Rosetta reached its target.

As we well know, rendezvous wasn't without incident: instead of dropping neatly on the surface of 67P, the mission's Philae lander bounced a few times before settling into a shadow for a nice lie down.

Scientists are, however, looking excitedly towards perihelion, when it will be 186 million km from the Sun – and, since the comet will be at its warmest, it will also be at its most active.

Even though Rosetta's close enough to have collected images with 11 cm (4.3 inch) resolution, it's at enough of a safe distance that the European Space Agency boffins reckon it should be safe from stray chunks of whatever 67P ejects during the solar fly-by.

Since the mission began in earnest, Rosetta and Philae have kept the excitement coming for astro-boffins.

Philae's slow-motion bounces also meant it was able to sample more than one site, so that when it got enough sun to transmit its results, it delivered some surprises: “methyl isocyanate, acetone, propionaldehyde and acetamide”, none of which have been observed on a comet before.

Back in March, it also sniffed out molecular nitrogen, and of course, there's been a string of images of the rubber-ducky-shaped comet that the ESA handily compiled into the GIF below.