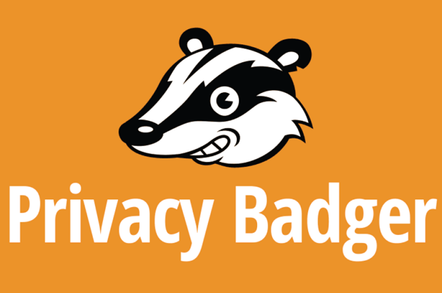 The Electronic Frontier Foundation has launched a browser add-on to impede snooping efforts of advertisers and other third-party web trackers.

The EFF has released the stable version of its browser add-on, branded Privacy Badger for some unknown reason, in order to “put an end to non-consensual browser tracking.”

“Although we like Disconnect, AdBlock Plus, Ghostery and similar products,” they say, noting that Privacy Badger is based on the ABP code, none of those add-ons suited the folks at the EFF – who doubt netizens' ability to configure them to block non-consensual trackers.

The Apple-applauding EFF additionally confessed: “Several of these extensions have business models that we weren't entirely comfortable with.”

Through Privacy Badger, the EFF intends to produce a codebase which would be adopted by other extensions, or by mainstream browsers, to empower users to control who does and doesn't get to know what they do online.

The add-on follows the digital rights group's failure to get the industry onside with its Do Not Track (DNT) standard. The voluntary DNT, ultimately a HTTP header which browsers would use to inform services that they did not consent to being tracked, remains largely ignored by data slurpers whose business models depend upon such tracking.

Self-regulation is as unlikely to curb web surveillance as it will curb similar activities in meatspace. Privacy Badger will attempt to provide some incentive to snoopers by whitelisting services which have agreed to the standard. Naughty non-compliant third-party domains, however, will be blocked.

The Privacy Badger add-on will block requests originating from servers which appear to be tracking users through identifying cookies, as well as local storage super cookies, and canvas fingerprinting.

Canvas fingerprinting caused a fair stir in 2014 when boffins from Princeton University in the US and Belgium's KU Leuven university published a paper titled "The Web Never Forgets" (PDF) on its occurrence in the wild wild web, although it was first described by University of California researchers in 2012 (PDF).