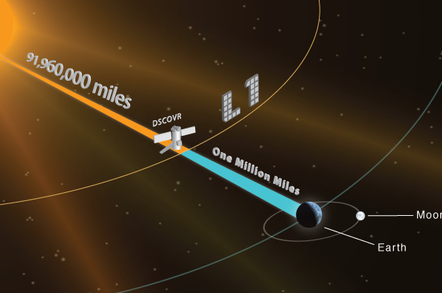 A million miles out in deep space far beyond the Moon's orbit, closer in to the Sun, lies the L-1 Lagrange point. Here sits the DSCOVR spacecraft with its EPIC instrument pointed back at Earth. NASA has just released some EPIC images, showing the moon zipping past in front of Earth.

Hey, I can see your moon from here

DSCOVR's full name is the Deep Space Climate Observatory, it being so dubbed for its position at the Lagrange point one million miles away on a line from the Earth to the Sun, where the interplay of gravitation between the star and the planet will keep it steady.

The primary mission of DSCOVR is to monitor the solar wind and its interaction with the Earth, including the advance detection of solar storms and suchlike. However the space platform also carries the Earth Polychromatic Imaging Camera (EPIC) aimed back at the homeworld for the purpose of imaging the various reflected and emitted light and radiation given off by our planet.

“It is surprising how much brighter Earth is than the moon," says Adam Szabo, DSCOVR boffin at NASA. "Our planet is a truly brilliant object in dark space compared to the lunar surface.”

DSCOVR was launched aboard a SpaceX Falcon 9 rocket back in February and has recently joined the collection of human space platforms orbiting in the neighbourhood of L-1 (the first mission to the Lagrange point departed in 1978, and there are several operational spacecraft in the vicinity at present).