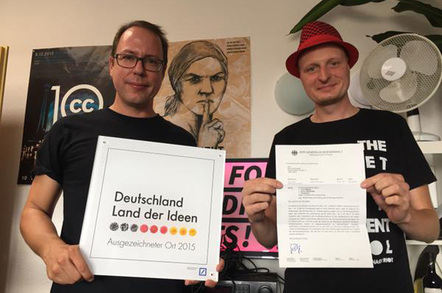 Victory: Beckedahl (L) and Meister of Netzpolitik claim a surge in donations

Netzpolitik.org, the website at the centre of the treason scandal in Germany, is the real winner in the whole furore as a senior German official was forcibly retired over the scandal, editor Markus Beckedahl told el Reg this morning.

Last night, Germany's chief federal prosecutor Harald Range was given the boot by German Justice Minister Heiko Maas over his handling of the affair. Technically, Range resigned, but it was his decision to pursue Beckedahl and fellow journalist Andrew Meister for treason that led to his downfall.

The journalists, meanwhile, have seen donations to their website come flooding in. The pair were under investigation for treason for supposedly betraying state secrets after they published leaked documents relating to plans to monitor Twitter and Facebook chats, as well as a €2.75m project to process massive online data sets.

The whole affair was sparked by a complaint from the country’s domestic spook service, the Federal Office for Protection of the Constitution (BfV). Beckedahl said they must answer for their involvement.

“The departure of Harald Range is a first step, but he is not the main person responsible. The BfV is the one that went after us. We want to know who is responsible politically. They have been investigating for two and a half months and none of the executive claims to know about it. Either the government is full of incompetent people, which I can’t really believe, or there is a cover-up,” he said.

There has been a silver lining in the investigative cloud, however, for Beckedahl and Meister. On Saturday more than 2,000 people turned out to march in support of them and their organisation has, they say, received €100,000 in donations the last few days.

“It looks like we have been the real winners,” said Beckedahl. “With the donations we have received we can build up our editorial team, hire more journalists and cover more surveillance issues.”

The last time German journalists faced a charge of treason was in 1962, and it appears that the German press and public alike were not inclined to allow a repeat of that. Anti-surveillance campaigner Jacob Appelbaum said on Twitter: “All the cynics that think that everyday people can't shift politics, the Landesverrat action will stand as a positive example.”

On Wednesday he published a letter of supportfor Beckedahl and Meister that was signed by Glenn Greenwald, Julian Assange and dozens of other journalists from around the world.

The official status of the investigation is still not clear, but Beckdahl said: “We want a formal end to the investigation. We want the charges dropped and we want transparency about whether there was surveillance on us.” ®