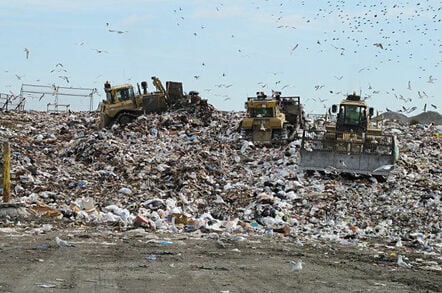 Rubbish: HMRC is trying to clean up the mess left by its Aspire contract

HMRC is to follow the lead set by the Met Police by setting up a private company to run elements of the tech estate that currently fall under the scope of the failing multi-billion pound Aspire contract.

This is the first step HMRC is taking to replace Aspire – the largest single tech contract in UK public sector, which it is estimated will have cost taxpayers £10.7bn by the time it finally expires in 2017.

Aspire – which underpins the annual collection of some £500bn in tax income – was first created in 2004 and was anticipated to cost £4.1bn.

Case Management is a single platform for handling compliance cases. Excite provides services including managing the movement of duty-suspended goods and exchanging claims for VAT refunds between tax men at EU member states.

A representative of the government’s coin collector confirmed the move, saying it expects to save "up to" 24 per cent on its annual £800m ICT budget by 2020/21.

HMRC spends 84 per cent of its ICT budget with the integrators Fujitsu, Capgemini and Accenture that run Aspire services – companies that made hay while the sun shone, pocketing well over £1bn in profits.

The contract came under fire from the National Audit Office last year over the continued alteration and late running of projects, and obviously the costs too. The Public Account Committee also voiced serious reservations about HMRC’s ability to replace Aspire by 2017.

Clearly HMRC chiefs took note of the criticisms – the Chancellor has signed off the Aspire Replacement Programme (ARP), according to Andrew Levitt, HMRC Account CEO at Capgemini.

In a memo to staff – seen by us – the exec said HMRC wishes to “explore” a “phased transition” of the services and not take a “big bang approach occurring in a short space of time”.

He confirmed Capgemini will transfer Case Management, Excite and MOIS Procurement Services to HMRC, “under their direct control”, from December 1.

“HMRC have chosen those particular areas as they view them as critical to enabling the Business Productivity savings. In Case Management, HMRC wants to build up their capability to avoid reliance upon costly third-party contractor support, whilst Excite is a key platform supporting changes to Customs and International in alignment with the future direction of the CHIEF system,” said Levitt.

CHIEF processes declarations for goods entering and exiting the UK/EU via ports and airports, and digitises customs info.

Around 250 roles will be transferred from Capgemini to HMRC on December 1, covered by TUPE regulations. “They will have continuity of employment and ongoing career development,” Levitt added.

The Public and Commercial Services union (PCS) backed HMRC’s plan for ARP: “Our position has always been that there is no place for profit in delivering vital public services, and so in principle the new company is a step in the right direction.”

“PCS has both public sector and private sector employees working on Aspire and our priorities are to protect their interests,” said a rep.

Levitt at Capgemini confirmed to staff that as the break up of Aspire happens, HMRC has agreed to extend the Test and Release service portion to the integrator for another three years until June 2020.

The cost of doing so was not made public, but hey, what's some more millions when billions has already been spent.

Levitt said the other steps in the ARP have yet to be defined, and that HMRC’s future plans will be “shaped by consideration of how these initial plans progress, especially in the context of mitigating risk to HMRC’s services”.

When the contract ends in two years, HMRC will need to fall in line with the government directive on procurement that includes working with smaller suppliers and taking greater control of the development and provision of tech services, the Capgemini man noted.

Separately, HMRC revealed some months back that it is looking for a supplier to help it exit the hefty outsourcing arrangement and has tendered a £20m contract – so it is looking to outsource activities to unpick the original outsourcing agreement.

The Met Police took four years to get its private company off the ground, launching it in March to run ICT services and procurement on the back of a £183k grant from the Police Innovation Fund.