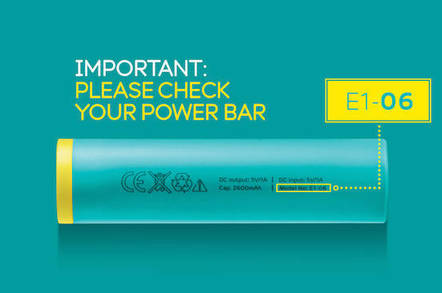 Recall: If your Power Bar has this model number, return it to EE immediately

EE has recalled thousands of Power Bar phone chargers just days after a woman ended up in hospital when one of the devices exploded, causing injury to her hands and damage to the victim's property.

The UK's biggest mobile operator said it was aware of a small number of incidents where the power pack had overheated, posing a fire safety risk.

It has also suspended its Power Bar swap service until the recall has been completed and the portable batteries have been restocked with a fresh batch.

Dodgy devices relate to batch E1-06, EE said. Customers can find out if they have one of the affected Power Bars by searching for the model name on the side of the charger.

The company advised customers to stop using the device and to return it to a local EE store. It said:

Power Bars from any other batch aren't affected by this recall.

It's our intention to replace these chargers once we've completed our investigations; we'll be in touch once these have been concluded. We're really sorry for any inconvenience this may cause.

EE claimed that the issue was isolated and added that it wasn't seeing "any issues of overheating with other batches and they meet all safety standards".

Late last month, 26-year-old medical student Katy Emslie revealed that an EE Power Bar that had been charging in her laptop while she slept exploded and shot across the room, before landing under her bed causing a fire.

She burned her hands trying to put the fire out and was treated at A&E, including plastic surgery, for five hours following the ordeal.

Ty @EE for the powerbar which exploded, almost burned down our house+left my hand like this: #Firework pic.twitter.com/MRzdsbj52P

In 2018, Facebook is the villain and Microsoft the shining light, according to techies

Exploding femtocells: No need for a full recall, says Vodafone

Change yours if you're worried, but operator insists issue is limited to earlier models