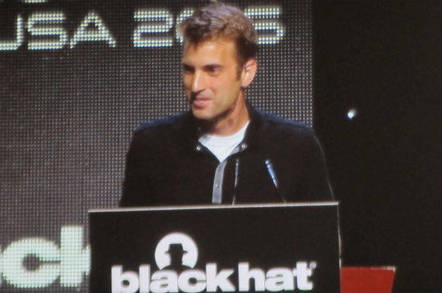 Black Hat 2015 For those of you worried about the Stagefright flaw in Android, be reassured, a patch will be coming down the line in the next few days.

"My guess is that this is the single largest software update the world has ever seen," said Adrian Ludwig, lead engineer for Android security at Google. "Hundreds of millions of devices are going to be updated in the next few days. It's incredible."

All Nexus devices are going to be patched, and Samsung, Motorola, HTC, LG, Sony, Android One, and hundreds of other manufacturers are going to push out the patches too, he said. Some handset vendors, like Silent Circle, have already patched their operating systems.

"With the recent security issues, we have been rethinking the approach to getting security updates to our devices in a more timely manner," said Dong Jin Koh, EVP of Samsung Electronics, Mobile R&D Office.

"Since software is constantly exploited in new ways, developing a fast response process to deliver security patches to our devices is critical to keep them protected. We believe that this new process will vastly improve the security of our devices and will aim to provide the best mobile experience possible for our users."

In addition, Google, Samsung, and LG have made a commitment to send out monthly security patches to users that will fix any upcoming issues in the operating system. These updates have been sent out to manufacturers for years, but now end users will get them too, and they will continue for at least three years after the launch of any new handset.

"We've looked at the events of the last few weeks and realized we need to move faster, and that we need to tell people what we are doing," Ludwig said.

The Stagefright flaw was a serious issue, with 95 per cent of devices potentially vulnerable, he said, but there were mitigating factors. Android Jellybean 4.1 or later devices had address space layout randomization (ASLR) to block memory exploits, he said, and this bought enough time to sort out the issue.

As for the other Android bug from last week – Trend Micro's discovery of an integer overflow bug in Android's media server service – that too will be fixed by the end of the week. The flaw allowed phones to be crashed and silenced due to errors in video handling, and a fix is in place despite Google initially dismissing the issue as low priority.

"Google's messenger app gets updated by end of week so it won't build dynamic media thumbnails," Ludwig promised. "Sorry, but thumbnails are going to be very boring for the next week."

It's not just about the updates: Google is investing considerably in hardening up the Android ecosystem and blocking applications that could be considered malware, Ludwig promised.

In June, Google announced Security Rewards for Android, a bug bounty scheme specifically for the mobile operating system. The rewards include smaller payouts for simple bug finding, similar to the bounty system for Chrome, but for full exploit chains showing a bug, exploitable proof of concept, and resulting in gaining access to the TrustZone in Android, the payout could net up to $38,000 for researchers.

Developers are also going to be getting warnings if their code is found to break the rules, either inadvertently or by design. So far Google has warned developers about more than 60,000 applications, but Ludwig said he wanted that cut to zero in the long run. ®