Attorney General wanted to plough on ... others aren't so sure 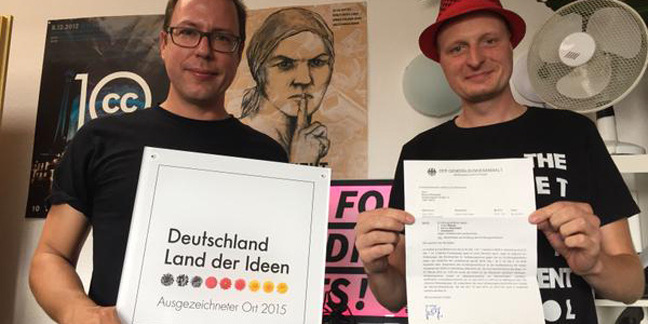 The chief prosecutor claimed journos Markus Beckedahl and Andre Meister had betrayed state secrets by reporting on the Euro nation's domestic spy agency and its plans to snoop on online communications.

On Monday, Chancellor Angela Merkel’s office said she was not informed of plans to pursue the pair, and only learned about the investigation through the media.

Meanwhile, Justice Minister Heiko Maas said that he warned the prosecutors against going down this path, adding that he did not believe that the actions of the journalists would endanger German security, and were therefore not treasonous.

The investigation into possible treason – which carries a minimum one-year jail sentence in Germany – was prompted by a complaint from the country’s domestic spook service, the Federal Office for Protection of the Constitution (BfV), after Netzpolitik published leaked documents relating to plans to monitor Twitter and Facebook chats, as well as a €2.75m project to process massive online data sets.

As the widespread outrage at the investigation gathered steam, on Saturday 2,000 people turned out to march in support of Beckedahl and Meister.

However, on Tuesday, Attorney General Harald Range remained defiant, saying he believed the pair had betrayed state secrets. He also said the Justice Ministry’s order to stop the investigation undermined the independence of the judiciary.

Meister told El Reg that neither he nor Beckedahl had received formal notification that the investigation had been dropped.

“We don’t know if that means we are under surveillance or not – although we have to assume we are. We have retained lawyers who have requested all the relevant documentation. Sooner or later we expect that the investigation against Markus and me will be dropped. It is also our demand that any investigation against our sources are dropped as well,” he said.

The last charge of treason against journalists in Germany was more than 50 years ago in the Spiegel Affair of 1962. The Netzpolitik investigation spiralled out of an internal Bundestag probe into those who leaked the documents, as El Reg reported in early July.

WikiLeaks and Edward Snowden associate Jacob Appelbaum, who is organising an open letter condemning the investigation against Beckedahl and Meister, said the support from German and international press had been impressive.

Meister said the organisation had received €100,000 in donations the last few days. ®

"The Justice Ministry has questioned Range's decision to open a much-criticized treason investigation against two journalists who had reported that Germany's domestic spy agency plans to expand surveillance of online communication," the Associated Press reported in the past hour or so.

Netzpolitik is a donation-funded blog that promotes digital civil liberties. Both Beckedahl and Meister are accredited journalists and are being investigated under Berlin press law.