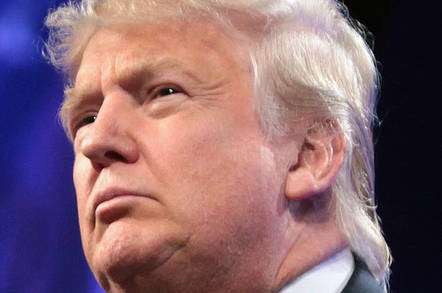 Canadian hacktivists Telecomix Canada have defaced Donald Trump's website. The message, entitled "Your Moment of Zen, Mr Stewart" is a shoutout to Jon Stewart of the Daily Show for his steady criticism of Donald Trump.

The announcement was made by Telecomix Canada on pastebin and says that the reveal of the server penetration is in honour of the last week of Stewart's tenure helming the Daily Show on Comedy Central.

The defacement is most likely a basic compromise of the website's CMS. The CMS looks to be pretty basic and, to be perfectly honest, pretty awful. A cursory look at the source code for trump.com's main page reveals a number of attack points and directories that have been "cleverly" obfuscated from standardised penetration toolkits by adding an underscore in front.

Telecomix Canada identify themselves as a tentacle of Anonymous. As has been discussed before pretty much anyone can self-identify with the hive, and what they get up to whilst under that banner can range from the incredibly altruistic to the obscene.

Telecomix Canada has traditionally hewn more to the altruistic side of the spectrum. Concerned with civil and digital rights, Telecomix's primary focus has traditionally been disseminating news and information that mainstream North American media refuses to report on and providing technologies and services allowing uncensored access to the internet.

Telecomix Canada has focused quite a bit on the deaths of civilians (especially children) in Middle Eastern conflict zones. It has also concerned itself with protestors' rights here in Canada, both in their on and offline activities.

The compromise of Trump's website marks a turning point in the hacktivists' activities online. In reaching out to The Register to publicise the breach it was conveyed that the event has caused some excitement amongst the team. It is unknown if they will continue to pursue security penetration as part of their ongoing activities.

Donald Trump's net worth has been estimated at approximately 4 billion USD. The Register has not been able to ascertain how much the developers or administrators of Trump's website get paid. An archived version of the injected webpage can be found here. ®

Team Trump has finally undone the work of Telecomix, restoring the wannabe-president's website to some definition of normal. We've preserved the vandalized site here for posterity: 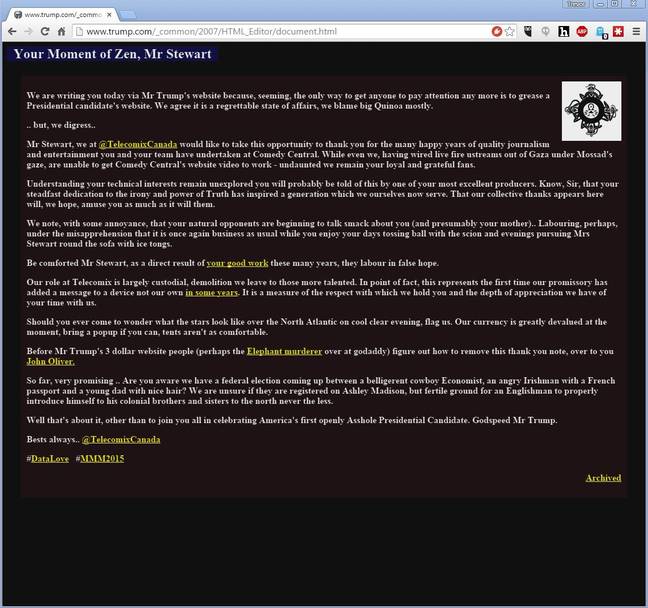