How much of one year's Californian energy use would wipe out the drought? 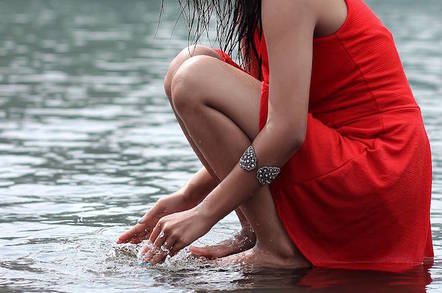 Opinion That California drought - it's terrible, isn't it? But there's nothing to be done. If it doesn't rain for a few years, and doesn't snow up in the mountains, Californians must just yield to Mother Nature and stop watering their lawns, stop washing their cars, maybe even stop growing those delicious but thirsty almonds.

Or ... must they? It doesn't seem very American to just meekly give up on such iconic indulgences as carwashes, lawn watering and almonds. One might think that the muscular spirit of US techno-capitalism would find some way around this problem. This, after all, is the nation that put men on the Moon, the nation which militarily outspent the Soviet Union while enjoying a far higher standard of living, the nation which really started the idea that even ordinary scumbags like you and me are allowed to have cars to wash and lawns to water.

But it's a big problem. No less an authority than NASA, having used satellites to scan the depleted watersheds of California, has stated that it would take no less than 11 TRILLION gallons of nice fresh water to sort out the Golden State and eliminate the current drought. That's an awful lot of water - and you can't just make drinking water, can you?

Of course you can: this isn't the dark ages. Seventy per cent of the planet is covered in seawater, and handily a lot of that is right next to California's biggest cities. Seawater can be desalinated to make nice fresh water - and you don't have to distil it either. Reverse-osmosis technology has been scalable since the 1980s.

But hey - desalination means using energy, right? And a lot of desalination means a lot of energy. And energy use is bad, because carbon. Anyway, enough energy to desalinate 11 TRILLION gallons would be a ridiculous, unfeasible amount. It could never be affordable. Right?

So, in general it takes 7 kilowatt-hours to desalinate an entire tonne (1000 litres) of seawater in a reverse-osmosis plant. Thus the clever Dr Wolfram tells us we would need 994 trillion BTUs* of energy to desalinate the necessary 11 trillion gallons.

That sounds like a lot of energy. But is it?

Not so much - not to a state like California, which according to the most recent figures gets through a cool 7,684.1 trillion BTUs of energy every single year. You could up that by 12 per cent for just one year and completely eliminate the drought. Or up it by 2 per cent for six years, etc.

If you liked you could consider public supplies separately, as most Californian freshwater use is for agriculture. Public supply requirements are less than 8 billion gallons a day in California, as opposed to the 22bn gals a day the farmers need.

How much energy would it take to desalinate all of the public supply, and let the farmers have all the water from the hills?

Dr Wolfram tells us: 264 trillion BTU annually, or a measly 3 per cent of the energy California already uses.

What would it cost?

Real world, you'd never need to let the farmers have all the rain and snow, and you'd use brackish water rather than sea brine - so the energy-bill figure would be a lot lower and the increase in carbon emissions would be insignificant, less than normal annual variation. On the other hand, the cost of building the desalination plants would push up the bills in the early years.

For context, though, typical Californian water bills are already in the $40-$70 per month range - and regarded as cheap at the price, correctly so for one of the wealthiest populations in the world.

What have we learned today?

California doesn't need to be having a drought at all right now. There is no real requirement for Californians to do without lawns or pools or carwashes. They may choose to, or have the choice made for them by lazy politicians and water companies - but it's a choice not a necessity, and it seems like an odd choice to make when the costs of not having to make it are so small.

And it's not just Californians. There's no reason for developed-world citizens living within reasonable reach of seas or estuaries to ever lack for water. Nonetheless, unnecessary "droughts" - actually, failures by politicians and water companies - happen in London too. ®

*Strangely perhaps, the US government prefers to use British Thermal Units. In Britain, by contrast, the kilowatt-hour and its derivatives are favoured.