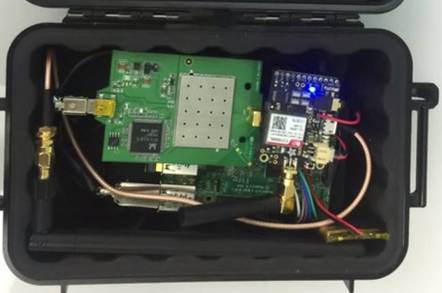 OwnStar, or "Yes I will have all your luggage thanks"

Anyone with $100 spare for electronic components, and some technical skills, can wirelessly track, unlock, and start General Motors cars that have OnStar fitted, it is claimed.

OnStar is a cellular service that piggybacks AT&T's cellphone network to connect vehicles to the internet: equipment in the car connects to the 'net via the OnStar service, and sets up a Wi-Fi network inside the vehicle so people can browse Facebook on the move, or whatever. OnStar's RemoteLink mobile app is used to connect to the car remotely from a smartphone, and control the vehicle's systems.

The OnStar hacking kit, dubbed OwnStar, was devised by serial merry prankster Samy Kamkar, who you may remember from such hacks as the 3D-printed lockpicker or the $10 wireless keylogger. He'll be going into more details about OwnStar, and other vehicle hacks, at the DEF CON hacking conference next week in Las Vegas.

Ownstar – which looks like a single-board computer, some antennas and a few controller circuit boards – requires the would-be thief to be in range of someone using the OnStar smartphone app, we're told. Using what sounds like a man-in-the-middle attack, the app's communications can be intercepted, which reveals the location, make and model of the vehicle, according to Kamkar.

"I suggest not opening the RemoteLink app up until an update has been provided from OnStar," he warned in a vid.

When the owner is away from the car, the attacker uses the intercepted information to masquerade as the OnStar app, and can there unlock the vehicle, and automatically start the engine, said Kamkar.

You can't actually drive the car off, however – that requires the key, but the gizmo would be a boon for those looking to harvest anything left inside the vehicle.

Exactly how the trick works won't be revealed until next week.

"In working with the researcher, we moved quickly to secure our back-office system and reduce risk. However, further action is necessary on the RemoteLink app itself. We take all cyber matters seriously, and an enhanced RemoteLink app will also be made available in app stores soon to fully mitigate the risk."

Thankfully for GM the problem is solely with the app itself, not with the cars, which means the giant will avoid the woes of rival Fiat Chrysler. A flaw in various Chrysler cars' in-car network left the company having to recall 1.4 million cars for an upgrade, and being hit with a possible $105m fine. ®

Register Lecture: The Death of the Gods – through a tweet darkly

Journey into future of disruption with Carl Miller