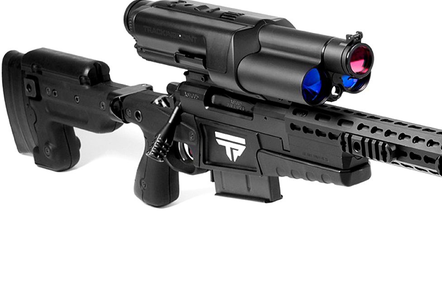 The internet is reeling today at the "news" that a rare make of computer-aided gunsight can under certain circumstances be hacked into, permitting a hacker to interfere with a suitably-equipped rifle's aim.

The gunsight in question is the much-hyped but seldom purchased TrackingPoint kit, a system with a Linux machine at its heart which can be fitted to a range of different rifles.

The TrackingPoint (details on its capabilities are at the end of this article) is mainly a curiosity. People who would be interested in it - experienced long-range marksmen - basically don't need it, and people who need it - those who have seldom or never fired a rifle - typically don't want it. And very few in either group can afford it.

But you wouldn't find that out by reading WiReD:

Put a computer on a sniper rifle, and it can turn the most amateur shooter into a world-class marksman.

The oh-gosh tech mag has partnered up this week with husband and wife security-pro hackers Runa Sandvik and Michael Auger in a publicity push ahead of the Black Hat conference. It seems that the duo have spent a year hacking into the TrackingPoint kit. So what have they done?

Well, the TrackingPoint's Linux heart has Wi-Fi. This is primarily intended to allow video from the gunsight to be exported to other devices, and it is turned off by default. If a TrackingPoint user leaves his Wi-Fi turned off, he can't be hacked.

However, if a TrackingPoint's Wi-Fi is turned on, and left on the default password, anyone who knows that default and is within Wi-Fi range can gain access to the system. This is pretty basic stuff - so basic you would hardly call it hacking, really.

It turns out that one can also, having got onto the gun's local network, get full access up to and including root on the Linux computer, and so do pretty much anything you like to it. It should be noted here that despite the TrackingPoint's trigger feature, this doesn't allow firing a shot: the computer only has the power to prevent firing. If the trigger isn't pulled the gun won't fire, no matter what the hacker may do.

What a hacker can do, though, is tamper with variables in the ballistic calculator so as to change where the bullet will strike:

Sandvik and Auger haven’t figured out why, but they’ve observed that higher ammunition weights aim a shot to the left, while lower or negative values aim it to the right. So on Auger’s next shot, Sandvik’s change of that single number [bullet weight] in the rifle’s software made the bullet fly 2.5-feet to the left, bullseyeing an entirely different target.

You would have thought that having spent a year on this project, the hacker couple would have taken time to look at the TrackingPoint website and bone up on some basic ballistics, but evidently not. However we here on the Reg weapons desk found time to do so this morning, and we would point out that the TrackingPoint system, among other things, compensates for "spin drift" or "gyroscopic drift".

Spin drift is a complex phenomenon and is affected by several factors. However the underlying reason it occurs is that bullets wobble a little as they leave the muzzle of a gun (they suffer "transient yaw", in the trade jargon). This gets damped out by the very strong gyroscopic stabilisation generated by the bullet's spin: but the damping process leaves the bullet stabilised in flight with a small off angle to the right of its line of travel (in the case of normal US-style clockwise rifling twist). This small angling to the right is known as the "yaw of repose" and means that the bullet is pushed slightly right by the air as it flies.

The formula for the angle of yaw of repose is given here. It's a bit fiddly, but what we care about is that the angle of yaw rises with the quantity Ix, which is the bullet's axial moment of inertia. All other things being equal, as a bullet increases in mass ("weight") it has a larger axial moment of inertia, the yaw-of-repose gets bigger and the bullet deviates more to the right ... and the TrackingPoint software corrects aim to the left further and further to compensate.

That's why, if you tell it the slug weighs a lot more than it does, you find your rounds going left of where you expected. Simples.

From the WiReD article it appears that you must actually be in the rifle's local Wi-Fi network to hack it: TrackingPoint's "ShotView" system actually allows video and audio to be streamed across the wider internet, but apparently you can't actually hack the gun from there. You have to be physically close to it and the user has to have enabled Wi-Fi and left it on the default password. Even then, all you can do is alter the direction of aim by quite small angles, brick the gunsight, or prevent the weapon from firing.

We should also remember that total TrackingPoint sales aren't thought to have been much more than a thousand, despite the massive hype around it.

Next page: Comment: Maybe not the most glorious bit of 'hacking' ever
Page:
Tips and corrections
43 Comments

Trust th'wife to out them to cops