Not perfect, but way better than IE – and it gives Chrome the willies 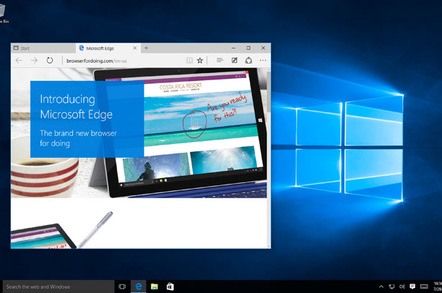 Review Edge, the new web browser in Windows 10 that was released on Wednesday isn't just a browser: it's an atonement.

Microsoft, it seems, wants to apologize not just for its recent Windows 8, but for the entirety of Internet Explorer. And, surprisingly, Edge turns out to be a great apology.

Perhaps the most surprising and welcome thing about Windows 10 is the absence of that old IE icon in the task bar. The web no longer orbits the "E", but instead there's a new icon: still an "E”, but less at the centre of the universe.

To be sure, IE is still lurking a few levels down in some start menu sub-section should you need it, but the focus – and the thing everyone purchasing a new machine with Windows 10 on it will click on – is Edge.

Edge is the future of the web on Windows, not just because Microsoft wants it to be, but because it's actually a pretty great web browser. In using test builds of Windows 10 for many months, and now the final version, I've yet to feel the need to install another browser.

There will no doubt be a lot of criticism levelled at Edge for not supporting cutting-edge web standards and new HTML5 features quite as well as other browsers. Those critiques are valid. Edge could have better support for standards. Web developers won't like its relatively low score on the HTML5 compatibility tests – it supports 402 of 555 features, compared to Firefox which manages 447 – but it's leaps and bounds better than IE 11. Edge is also brand new and, frankly, launches with better support for more web standards than Google Chrome did when it first arrived.

Edge might not be the darling of the web development set, but it's simple, reliable and fast. It also boasts a suite of features designed to help cut through the crufty web that those Google Chrome-wielding web designers have created. There's a built-in Reading View that gets rid of all the useless sidebars and other clutter so you can actually read the article you wanted to see. Then there's Cortana, which is pretty well integrated into Windows 10, but really comes into its own in Edge. 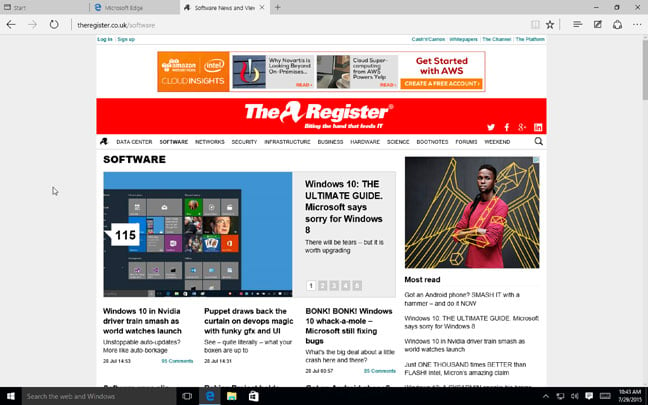 The one you love in Microsoft's Edge

Highlight terms and Cortana will get more information about them for you: search for something like weather and Cortana will get you results without loading a page. Microsoft's documentation says Cortana can provide answers for some 20 different types of questions without loading a search page. In everyday use I've only run across a couple, but they're handy when they're there.

Perhaps the most useful thing Cortana can do is dredge through the dreck that is the average restaurant website and pull out the only reason anyone ever went to that site in the first place – hours and contact info although it'll also show you reviews if there are any. Given the current state of most restaurant websites, it's worth turning on the (potentially) privacy-invading Cortana for that feature alone.

Next page: Aggressive, fast, not quirky, just how I like my browsers
Page:
Tips and corrections
76 Comments