iPhone giant to get comfy with CBS Interactive in San Francisco, apparently 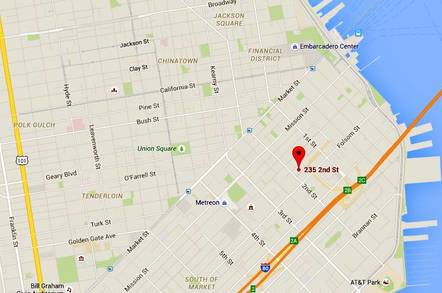 The iGiant will take 76,000 of the 283,000 square feet at 235 Second Street, according to a report by the San Francisco Business Times, citing sources in the real-estate industry. The space could hold between 400 and 500 employees, and the lease will reportedly run through 2022.

If the Cupertino giant does move into the office space, it will be sharing the building with CBS Interactive's CNET and ZDNet: CBSi bought the website CNET and the building in 2008.

Though the Apple brand is closely linked to the San Francisco bay Area (the OS X, iOS and Watch OS system font is called San Francisco) the fashion goliath has by and large stayed out of the city for its operations, opting to stay down in Silicon Valley and its hometown of Cupertino. Steve Jobs' other founding effort, Pixar, maintains its base across the bay in Emeryville.

Thus far, there has been no word on what branch of its operations Apple would be moving to the San Francisco offices, though the Business Times noted that recent Apple acquisition Beats has one of its offices in another San Francisco building and could be among the tenants lined up.

SoMa, once considered a down-and-out stretch of San Francisco, has emerged as a tech hotspot over the past 15 years. The former warehouse district houses the likes of Yelp, Ubisoft, and Zynga, amongst dozens of smaller startups and consultancy companies. ®