We'll give these financial figures one star out of five 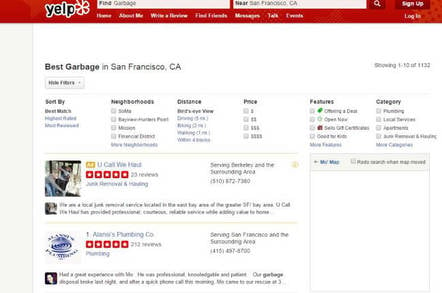 Yelp is in full crisis mode as the upstart's chairman is out – and its stock continues to free fall.

The reviews website, headquartered in San Francisco's startup land, announced on Wednesday that a modest $2.7m profit in the second quarter of 2014 had turned into a loss of $1.3m in the second quarter of 2015. This is despite Yelp raising revenues by 51 per cent, year on year, to $133.9m, and increasing the number of total reviews by 35 per cent over the 2014 quarter.

Investors were not thrilled with the results, to say the least. As of 12:45PM Eastern time, the New York Stock Exchange reported Yelp shares were down 28 per cent, trading at $24.06, compared to yesterday's $33.51 closing price.

Analysts credited the stock plunge to a loss of confidence by investors after Yelp failed to live up to the expectations placed on it since its 2012 initial public offering.

As a result of the poor numbers, Yelp said it is going to drop its brand advertising service, which posted an eight per cent decline last quarter, and focus on selling local ads instead.

The reviews site is also parting ways with board chairman Max Levchin.

A serial entrepreneur and former PayPal exec, Levchin had served on Yelp's board of directors since its founding in 2004.

"Max saw Yelp grow from just an idea in my head to a company worth billions of dollars with Yelpers around the world," Yelp CEO Jeremy Stoppelman said in a canned statement.

"We have mutually agreed this is the right time for him to step down given the demands on his time. I am grateful for his contributions to Yelp's success and wish him all the best going forward."

Yelp has not yet named a new chairman or director to replace Levchin. ®