MORE Windows 10 bugs! Too many Start menu apps BREAK it 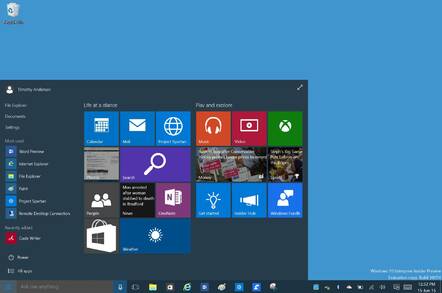 An issue with the new Windows 10 Start menu means that those with more than 512 application shortcuts will have missing entries.

In Windows 10, the Start menu includes an All Apps list, which you can search for quick access to installed applications.

Start menu shortcuts are still shortcut files placed in the same special locations as previous versions of Windows, but the Start menu app appears to be driven by a database on which some optimistic Microsoft coder has placed a limit of 512 entries.

The bug is documented (to some extent) here, where a user complains:

I had a little over 500 apps listed and after a secure reboot all my start menu links were gone and they're missing now from all apps, too.

There is no way to get Windows to recognise them again. Very annoying bug. I brought down the number under 500 by de-installing some stuff, but it still doesn't work.

The issue seems to affect people with more than 512 apps in their "All apps" list.

If you see a number larger than or equal to 512 you are affected by this issue. We are working on a fix to this issue.

The workaround is to use a third-party Start menu such as Stardock's Start10. Since the underlying shortcuts are intact, these solutions still work correctly.

Another good idea is to defer upgrading to Windows 10 until this kind of annoyance is fixed. ®