Humanity says “Hi!” to aliens in 55 languages on SoundCloud 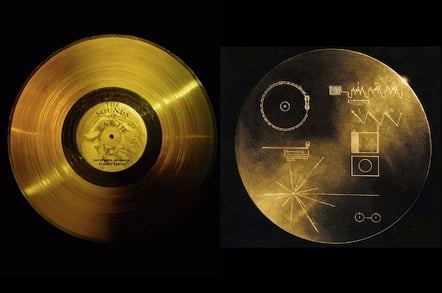 When NASA launched the two Voyager probes in 1977, it knew that they were on a one-way journey into the galaxy. So on the off chance they encountered another sentient species, NASA equipped both with a golden record full of information about Earth.

When we say record, think vinyl, grooves in a disk and the need for a stylus to reproduce analog sound.

NASA engaged Carl Sagan to select the disk's content. He packed it with music and all manner of Earthly sounds such as "surf, wind and thunder, birds, whales, and other animals." There are also 55 recordings of humans welcoming any aliens.

Voyager's web site has offered a few of the recordings for ages now, but NASA has now dumped all of the Golden Record's contents to SoundCloud for your listening and downloading pleasure, bar the presumably copyrighted music.

Here, for example, is the Welsh greeting to the stars, "Good health to you now and forever."

The sound quality's not going to give any audiophile aliens out there a reason to hotfoot it in our direction, but the selection does offer a nice sample of how humanity – as curated by Carl Sagan – felt it should represent itself to the stars. ®