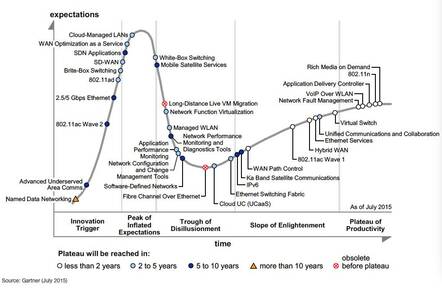 Gartner's network hype cycle: like Googling yourself, but with cred

Fibre channel over Ethernet is obsolete and software-defined networking is making users grumpy rather than delivering promised benefits, according to the new networking version of Gartner's Hype Cycle.

The document reckons Wi-Fi's next variant, 802.11ac Wave 2, is just half-way up Gartner's famed hype curve, but Wave 1 and 802.11n are both rocking along as productive technologies.

It also suggests software-defined networking (SDN) has arrived at the trough of disillusionment, meaning that people for whom it has no appeal beyond marketing will give up and leave the technology for those that actually need it.

Nearing the hype peak, Gartner reckons, are the WAN optimisation-as-a-service and cloud-managed LAN markets. The white-box switch market has already peaked and is starting to head down into the dumps, perhaps driven by vendors badge-engineering them into “brite-box”, accompanied by rising hype.

Despair not, SDN fans: one of the fundamental components of your technological armoury, the virtual switch, fares much better, being put near the top of the enlightenment slope and regarded by Gartner as mainstream.

SDN gets two other mentions on the curve: SDN applications are apparently near the top of the hype cycle, along with SD-WAN. The first refers to writing code using northbound and southbound APIs to “add capabilities to the network without relying on the network hardware vendor”; while SD-WAN (simplifying WANs by using application-based forwarding policies) is rated as important, there's limited vendor choice.

Gartner puts 2.5/5 Gbps Ethernet as on the hype-rise and warns against adopting pre-standard kit without good reason (heaven knows what they'd think of 25/50 gig Ethernet, which hasn't yet made it onto the curve).

Now that North America has noticed its shortage of IPv4 addresses, IPv6 is given the tick of approval as climbing the slope of enlightenment; walking with it are Ethernet switching fabrics (I hear cheering from the general direction of Brocade), and WAN path control (which seems little distinguishable from SD-WAN).

Hybrid WANs (treating technologies like carrier Ethernet and MPLS as a single WAN) and Ethernet services (that is, Ethernet WANs aka carrier Ethernet) are given equal billing on the upward slope, and Cisco will no doubt be thrilled to know that unified communications and collaboration is finally seen as productive.