Mobiles? What are they? Nokia immerses itself in virtual reality cameras

Psst. Oculus. Google. Are you listening? 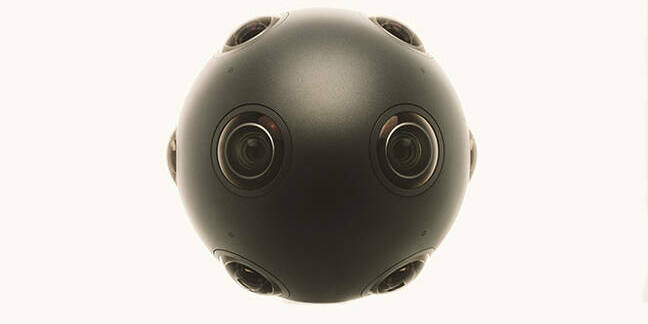 Always looking for a new angle, Nokia has launched itself into the movie equipment business with a 360-degree camera called OZO, capturing stereoscopic 3D video through eight synchronised global shutter sensors as well as spatial audio through eight integrated microphones.

Without naming names, Nokia said: “The video can be published for commercially available VR viewing hardware such as head mounted displays (HMDs), with immersive imaging and spatially accurate original sound.”

However, what we think the company means is Oculus Rift and Google Cardboard-type displays.

Software built for OZO enables real-time 3D viewing, with a playback solution that removes the need to pre-assemble a panoramic image a time-consuming process with other VR systems. OZO also integrates into existing professional workflows and works with third-party tools.

Having flogged the ailing phone business, Nokia, a company no stranger to re-inventing itself – it once made rubber boots, TVs and tyres – looked for something else to do and alighted on professional VR kit.

The OZO was dreamt up at the company's R&D facilities in Tampere, Finland, and is the first in a planned portfolio of digital media solutions from Nokia Technologies, the company's advanced technology and licensing business. It will be made in Finland.

"We expect that virtual reality experiences will soon radically enhance the way people communicate and connect to stories, entertainment, world events and each other," added Haidamus. Pricing and full technical specifications will be announced soon, with shipments anticipated in the fourth quarter of 2015.

In related news, Palo Alto-based VR production company Jaunt has announced a commitment to support OZO, both by offering the camera for use in Jaunt Studios and by supporting content produced with OZO through its post-production services.

"Our partnership with Nokia is another big step for us to continue to provide our partners with the most cutting-edge technology to further cater to their creative needs," said Cliff Plumer, president of Jaunt Studios.

As with all new technology, it seems that sport and sex offers the best way to penetrate ... the market [thank you Finbarr Saunders] ®