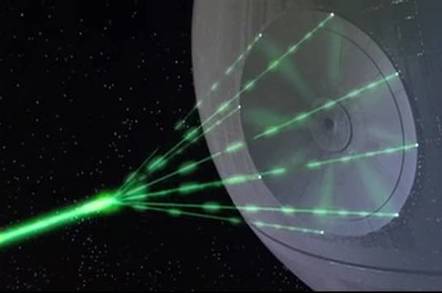 Nuclear fusion researchers at Osaka University in Japan claim they have made history by firing the world's most powerful laser – emitting a two-quadrillion-watt beam albeit for a very, very brief period of time.

The two-petawatt beam was formed using the huge LFEX (Laser for Fast ignition EXperiments) system developed by the university's Institute of Laser Engineering.

And the Death Star boffins plan to fire a beam that will be five times as powerful as this latest experiment.

"With heated competition in the world to improve the performance of lasers, our goal now is to increase our output to 10 petawatts," Junji Kawanaka, an associate professor of electrical engineering at the university, told the Asahi Shinbun newspaper on Tuesday.

LFEX was finished last year, is about 100 metres long, and will be used to develop a "fast ignition" fusion reactor: boffins hope to use lasers to heat a fuel core that will kickstart a fusion reaction much more quickly and efficiently than rival systems.

"In the experiment, energy was applied to special glass using devices that were basically lamps resembling ordinary fluorescent tubes, repeatedly amplifying the power of the beam," the Asahi Shinbun noted of this week's multi-petawatt experiment.

If two quadrillion watts sounds like an insane amount of power, it's because it is; the actual energy of the beam was enough to run a standard microwave oven for just two seconds. That's because the laser only fired for one picosecond, or a trillionth of a second.

So you're not going to be blowing up any planets with LFEX – although the thought must have been in the back on the minds of the engineers behind the project. Instead, the laser is going to be used to make life better. If viable fusion reactors can be achieved and maintained using the system, then everyone benefits. ®