Proposes 200-ft-thick layer of sky only for robot planes 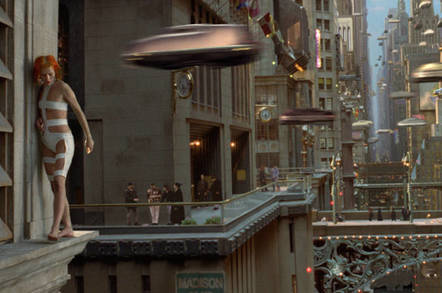 Amazon has outlined a futuristic plan that would give drones their own 200-foot-thick piece of sky to zoom around in – and deliver packages in super-fast times.

In two papers – posted online by The Guardian – the online giant foresees four classes of drone [PDF], the most advanced containing a range of technologies that would enable it to pilot itself around cities safely and quickly. Amazon has previously pushed the vision of 30-minute drone deliveries.

In effect, we'd end up with a Fifth Element-style situation, with drones whizzing around above our heads. 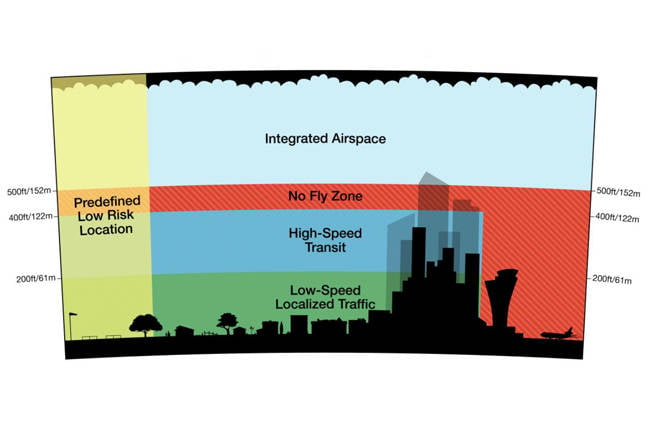 But under draft FAA drone regulations, all unmanned aircraft must be "visual line-of-sight (VLOS) only" – in other words the person flying it must be able to see the drone at all times.

Under Amazon's plan, this restriction would apply to three of its four classes, but the fourth – "Best" – would be allowed to carry out "beyond line of sight flight less than 400 feet in all operating areas, including urban, with vehicle-to-operator ratios greater than 1:1, transiting between 200 feet and 400 feet; daytime and/or nighttime; good weather or all weather as determined by sensor package performance capabilities."

In other words, automated drones.

What sort of technologies are we talking about that would allow this to happen? Prepare for UTM lingo:

Not all of this technology exists yet and air traffic control systems wouldn't be able to handle it if it did, but Amazon proposes that the growing drone industry work together on new standards that would make it possible for huge numbers of "small unmanned aircraft systems (sUAS)" to fly around without hitting one another.

"The development of an air traffic system that fully enables the safe operations of small unmanned aircraft systems (sUAS) in civil airspace, particularly highly-automated vehicles operating beyond line of sight (BLOS), is essential for realizing the enormous benefits of this technology in a safe and responsible manner," one paper reads. "A good place to start in creating such a system is to clarify the use of the airspace."

The company says it will "collaborate with civil aviation authorities like the Federal Aviation Administration, as well as NASA and others, on research related to delegation and federation."

Not exactly a buddy movie

So far, Amazon's relationship with the FAA has not been great: the company has been pressing it to open up to drones for years. CEO Bezos first outlined his idea of automated delivery by drones in December 2013 and was swiftly mocked for doing so.

The company pushed forward, but this time last year, the FAA poured cold water on its plan by ruling out the drone delivery plan in a press release, noting that it does "not authorize the use of model aircraft for commercial operations" and specifically excluded "delivering packages to people for a fee" as an allowable use.

Not to be outdone, Amazon then applied for an experimental flying license for its drones from the FAA. Which the FAA approved – but only after releasing draft rules that would make Amazon's delivery plans impossible.

That's when Amazon started playing hardball, going to Congress to complain publicly about the FAA's attitude. It then used America's permanent fixation with being better than Canada against the FAA by launching a testing facility in Canada and leaking the details to The Guardian.

Amazingly, the very next month, the FAA gave Amazon permission to test its drones.

Clearly Amazon has learned that with the FAA, the only thing that works is external prodding: hence the papers on Tuesday at the NASA conference. ®