So what the BLINKING BONKERS has gone wrong in the eurozone?

Is it simply that inflation creates Nazis? REALLY? 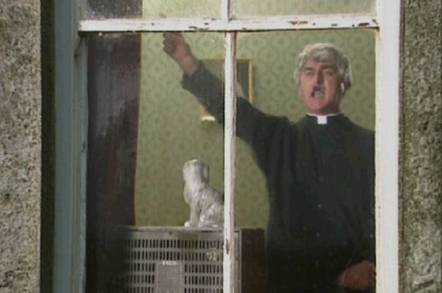 Would you like a cup of tea, Ted, while those money people sort out this eurozone problem? Go on, go on, go on

Worstall @ the Weekend A while ago, one of The Register's anonymous cowards posted a question about inflation.

Can anyone explain why printing truckloads of money was the correct thing to do for UK and USA while restricting the money supply and austerity was the necessary [thing] for every other advanced country in Europe?

Was it simply that all Germans believe that inflation (even 2.1 per cent inflation) causes Nazis?

To which my answer was: well, pretty much, yes.

But there's a bit more to this so let's take a little wander through the intellectual history. The basic equations and arguments are laid out here so we'll not do most of that again. This is more about who believes what than about what is actually true.

To slide all the way back to the gold standard there wasn't really anything called monetary policy under it. Not something that you could vary to achieve a desired effect that is. So it's a quite late developing area of economics, one that doesn't really get seriously studied until the idea that money doesn't have to be based upon gold, or any other physical commodity, takes hold so that people can explore the implications of it all.

All of which means that it wasn't really until the 1930s that people started thinking seriously about it.

When, in the depths of the Great Depression, a number of countries did come off the gold standard, the UK and US among them. For the UK this pretty much solved the Depression related problems (we actually had our bad time in the late 1920s, when Winston Churchill put us back on the gold standard after we'd left for World War One. He put us back at the pre-war rate, which is why we got our poor times early, lucky us).

Franklin D Roosevelt was so cocking the US economy with ill-thought out interventions that, while leaving gold helped, it didn't actually solve all the problems.

Yes, I know, that's not the way the story is normally told: but Roosevelt's thrashing around extended, rather than solved, the Depression. John Maynard Keynes may well have been right but Roosevelt did an awful lot that was counter-productive by those Keynesian standards.

One of those seriously horrendous mistakes that Roosevelt and the Federal Reserve allowed to happen was the collapse of the banking system and thus of the money supply. A falling money supply is simply going to lead to he most horrendous economic conditions. And the person who pointed all of this out was American economist Milton Friedman, with Anna Schwartz, in his book Monetary History of the United States.

Fortunately, this time around, both the Fed (Ben Bernanke – now a Distinguished Fellow in Residence with the Economic Studies Program at the Brookings Institution – was actually a researcher of this period as a professor) and the Bank of England had read this work and understood it.

Thus minor banks like Blighty's Northern Rock could go bust, Lehman's, well, maybe that was a mistake maybe not, but there simply was no chance that anyone was going to let the major commercial banks go under.