SPLAT! STAR THWACKED, GUTS flung into space at 15 per cent of LIGHTSPEED 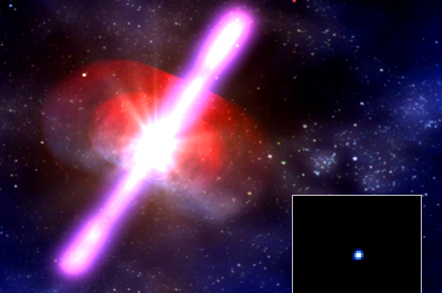 A funkier Chandra pic than the one issued for this story

In perhaps the most violent punch that has ever been witnessed by humanity, a speeding pulsar has smashed right through a disk of matter bulging from the middle of a hefty star and blown a massive chunk of it guts into interstellar space at a significant fraction of light speed.

That's according to top space boffins peering through the orbiting Chandra X-Ray telescope, who have been observing the vicious drubbing handed to the far-flung massive star B1259, 1,500 parsecs off in the constellation Crux (in the direction of the Southern Cross, that is).

B1259, about thirty times as massive as our own Sun, is spinning very fast and has a big disk of matter bulging out around its middle as a result. It also has an abusive companion, a pulsar – that is an ultradense blob of neutronium left behind after an even bigger star blew up in a supernova. The pulsar travels around the big fellow in a very fast elliptical orbit such that it punches through the disk every 41 months.

The latest punching observed by Chandra has seemingly spattered matter out of the disk with such violence that it is now travelling out into interstellar space at no less than 15 per cent of light speed.

“After this clump of stellar material was knocked out, the pulsar’s wind appears to have accelerated it, almost as if it had a rocket attached,” said astroboffin Oleg Kargaltsev.

“This just shows how powerful the wind blasting off a pulsar can be,” added Kargaltsev's colleague Jeremy Hare. “The pulsar’s wind is so strong that it could ultimately eviscerate the entire disk around its companion star over time.”

The Chandra X-ray scope went into space aboard space shuttle Columbia back in 1999, and after leaving the shuttle boosted itself into a high elliptical orbit using its own propulsion system. It spends much of its time outside the Earth's charged-particle belts, getting a good view of all the violent action from the hot parts of the universe. It has been described as the most sophisticated X-ray instrument available to humanity.

The new star-punch splatter boffinry is published in the Astrophysical Journal and can be read here. ®