Boffins startled to make crucial discovery ... in a museum 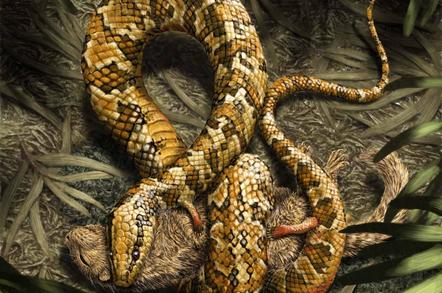 A strange fossilised snake possessing four limbs which it could use for walking or gripping things has upset the applecart in the world of palaeo-snake boffinry.

The fossil in question had actually been excavated some time ago in Brazil, which had been part of the ur-continent Gondwana at the time the leggy snake was alive, and was properly "discovered" recently as part of an exhibit in a museum in Germany by Dr Dave Martill of the University of Portsmouth.

“The fossil was part of a larger exhibition of fossils from the Cretaceous period. It was clear that no-one had appreciated its importance, but when I saw it I knew it was an incredibly significant specimen," Dr Martill crowed.

Having realised the significance of the leggy snake, Martill called in expert German palaeontologist and Dr Nick Longrich from the University of Bath. Longrich was apparently roped in "over a pint at the local pub in Bath".

“A four-legged snake seemed fantastic and as an evolutionary biologist, just too good to be true," he enthused. "It was especially interesting that it was put on display in a museum where anyone could see it.”

The walking snake has been dubbed Tetrapodophis amplectus. Regarding the fossil itself, we're told:

The snake is a juvenile and very small, measuring just 20cm from head to toe, although it may have grown much larger. The head is the size of an adult fingernail, and the smallest tail bone is only a quarter of a millimetre long. But the most remarkable thing about it is the presence of two sets of legs, or a pair of hands and a pair of feet.

The front legs are very small, about 1cm long, but have little elbows and wrists and hands that are just 5mm in length. The back legs are slightly longer and the feet are larger than the hands and could have been used to grasp its prey.

It appears that the limbs of the snake may have been used for other things than walking – perhaps eating, or grappling with snakes of the opposite gender during steamy snake nookie sessions.

“It is a perfect little snake, except it has these little arms and legs, and they have these strange long fingers and toes," said Longrich.

“So when snakes stopped walking and started slithering, the legs didn’t just become useless little vestiges – they started using them for something else. We’re not entirely sure what that would be, but they may have been used for grasping prey, or perhaps mates.”

One thing which this particular snake seems to have grasped was a salamander for lunch, as the remains of such a beastie were found in its stomach.

Video Brits catch God yet again screwing with our heads