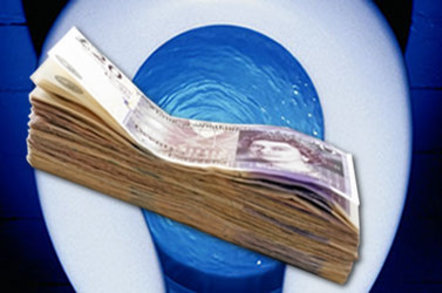 The losses quadrupled compared with its second quarter in 2014, when the biz dropped $12.1m over the three-month period. Overall revenues dropped five per cent to $765m (£494m).

Nevertheless, chief exec Peter Altabef remained upbeat. In his best Pollyanna impression he said: "We were pleased to see solid revenue growth on a constant currency basis during the quarter", adding that the company is "aggressively implementing" its new operating model.

The biz is currently putting in place "organisational initiatives" intended to shave off $200m (£129m) in costs by the end of 2016.

Sales in the US and Canada rose 23 per cent in the quarter, while revenue from the rest of the world (including the UK) dropped 24 per cent.

John O'Brien, analyst at TechMarketView, noted the company has been quiet in Blighty for sometime.

"There are some signs of things improving in the public sector at least," he said. "Meanwhile, a new global partnership with fast-growing SaaS specialist ServiceNow for cloud service management may help Unisys shrug off its legacy provider image, and move faster into newer 'as-a-service' delivery model," he said. ®