Jeep breach: Scared? You should be, it could be you next

Why the hell connect cars to the net anyway? 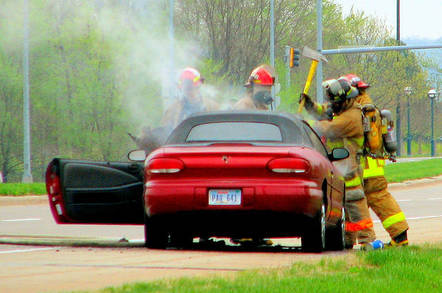 Other vehicles may be at risk from hacking following the Jeep Cherokee incident, according to one of the two researchers who pioneered the spectacular auto exploit.

The duo previously hacked a Toyota Prius and a Ford Escape, although those hacks relied on taking over a vehicle's systems by plugging directly into a car's network via a port under the dashboard.

The latest hack allowed the duo to take over a Jeep from 10 miles away, meaning they could take over, turn on the AC, blast music, disable the transmission and even disable the brakes. The researchers demonstrated how skilled hackers might be able to hack into vulnerable cars simply by knowing the the vehicle's IP address.

The researchers previewed an upcoming Black Hat talk by demoing the hack to Wired journalist Andy Greenberg who describes what it was like to become a passenger in the Jeep car he was driving after the hackers hijacked it.

The Jeep ended up in a ditch after its brakes were remotely disabled at the climax of the hack.

Fiat Chrysler Automotive – manufacturers of the Jeep Cherokee – were aware of the hack before it was demonstrated and had already released firmware patches for vulnerable vehicles.

Only cars sold in the US were ever vulnerable due to the way the connectivity for the technology works, as a blog post by Fiat Chrysler (containing a full list of vulnerable models running previously hackable navigation/entertainment systems) explains.

The car maker is understandably keen to play down motorists’ potential fears when learning of the alarming demo hack. “To FCA’s knowledge, there has not been a single real world incident of an unlawful or unauthorised remote hack into any FCA vehicle,” Fiat Chrysler said.