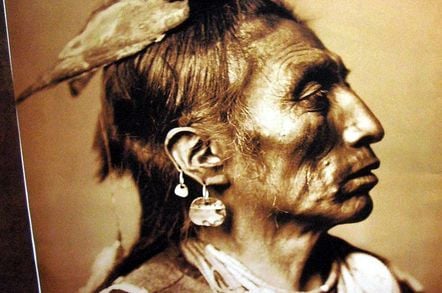 A long-vanished race of humans, whose descendants now survive only among certain indigenous peoples in Australasia and in the Amazon jungles, may have been the true, original Native Americans, according to new genetics research.

The clue to the existence of this mysterious "Population Y" has been found by boffins probing the genes of various native-American peoples. Amazingly, the researchers found that a couple of tribes in the Amazon jungle actually had quite a lot in common genetically with others in Australia, New Guinea and the Andaman Islands.

It's well known, of course, that humanity spread from its original cradle in Africa out across Asia and thus south to Australasia and separately north - via the Bering Strait land bridge, then in existence - to North America.

The first emigrants across the Bering were the First Americans. What's not totally clear is exactly when they arrived, how many of them there were, what other groups arrived at what point etc. Given that they were arriving via a travel route just south of the ice sheets which then covered a lot of the northern globe, it's generally thought that they didn't come in a continuous stream, but more probably in waves when conditions were favourable.

One widely-held theory has it that the First Americans arrived in one wave of fairly genetically similar people, and this theory fitted pretty well with the observed genetics of native-American people both North and South. But the Amazon-Australasia linkage has pretty much upset that applecart.

"We spent a really long time trying to make this result go away and it just got stronger," says Professor David Reich of the Harvard Medical School.

Having failed to sweep the inconvenient genes under the carpet, Reich and his colleagues were compelled to come up with a new theory. They now believe that both the Australasian and Amazonian tribes have a common ancestral group, dubbed "Population Y", which back in the mists of time was to be found in East Asia in sufficient numbers that these people spread down to Australia and also past the northern ice to America.

"We don't know the order, the time separation or the geographical patterns," explains Pontus Skoglund, who worked with Reich on the research.

The big question, however, is: What happened to the Population Y people, vanished now from East Asia and most of the Americas too, such that their descendants now survive only among remote and isolated jungle tribes?

"Nobody looks like this," says Skoglund. "It's an unknown group that doesn't exist anymore."

It would seem at least possible that the people we now know as the First Americans arrived to find the actual native Americans already there, and displaced them with a thoroughness that would make later efforts by seagoing European migrants look relatively mild.

The research is published in hefty boffinry mag Nature. ®

Will that bacteria just make you a bit ill? Or do hospitals need to roll out their spare beds?

Genetics boffins on the verge of artificial bacteria

The other Second Life