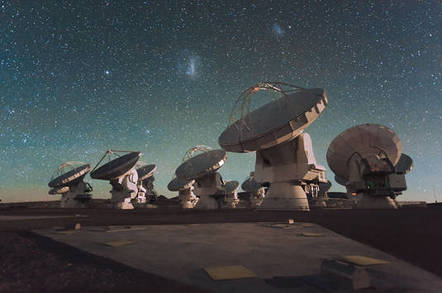 I can see an early proto-pub from here

Far back - quite literally into the earliest mists of time, when cold hydrogen fog cloaked the birth pangs of the early universe - the galaxies were born. Now, top boffins have pierced that fog and snapped a live action pic of one such galactic birth.

Astronomers refer to this period, apparently, as the Epoch of Reionisation. This snappy name comes from the fact that neutral hydrogen soaks up ultraviolet light, meaning that one cannot/could not see anything on those wavelengths during that period of time. However the soaking up of the UV ionises the hydrogen and makes it transparent so that it's possible to make out what's - or in this case what was - going on.

Until now, when astroboffins were peering at things so far off that they were seeing the events of the Epoch of Reionisation, things were naturally pretty indistinct as much of the un-ionised hydrogen fog was still blanketing all the good stuff going on with all the nascent galaxies. But by unleashing the full puissance of ALMA, a team of such boffins has managed to get some detail at last.

"For the first time we are seeing early galaxies not merely as tiny blobs, but as objects with internal structure!” exclaims top brainbox Andrea Ferrara, in excitable tinned quotes.

Dramatically, we are told:

[The] astronomers trained ALMA on galaxies that were known to be seen only about 800 million years after the Big Bang .[They] were not looking for the light from stars, but instead for the faint glow of ionised carbon coming from the clouds of gas from which the stars were forming ...

From one of the galaxies — given the label BDF 3299 — ALMA could pick up a faint but clear signal from the glowing carbon. However, this glow wasn’t coming from the centre of the galaxy, but rather from one side.

Admittedly this is not what you'd call really terrifically high-resolution detail: essentially each pixel in this image is half of an entire super-gigantic proto-galaxy. But given that the boffins are looking through a distance of around 13 billion light-years, that's actually extremely impressive.

Ferrara and his colleagues theorise that the carbon glow is/was off-centre due to something pretty violent going on in the middle of BDF3299 - stars roaring into flame, supernovas exploding and so forth, as opposed to any showy quasar/black hole nonsense - which has smashed up all the carbon there. Meanwhile more is being slurped in by the galaxy from the surrounding intergalactic ur-medium, making the cold, carbon-heavy spot they are seeing towards the edge.

“Finally to be able to test predictions and hypotheses on real data from ALMA is an exciting moment and opens up a new set of questions. This type of observation will clarify many of the thorny problems we have with the formation of the first stars and galaxies in the Universe,” adds Ferrara.

It's all extremely gratifying and full boffinry detail has just come out in the Monthly Notices of the Royal Astronomical Society. It can also be read here. ®