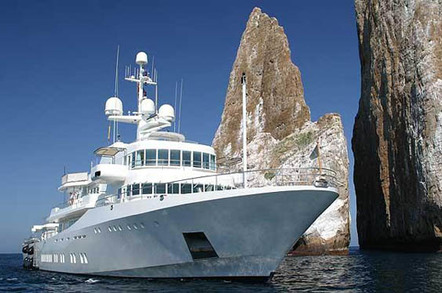 Yacht: This belongs to Mike Lynch. Just in case you forget

Cyber security outfit Darktrace, which is backed by billionaire superyacht owner Mike Lynch, has raised yet more cash, this time drumming up the princely sum of $22.5m (£14.4m).

It has also recruited a number of cyber threat analysts from the National Security Agency.

The latest cash pile, from investment firm Summit Partners, is said to value the company at $100m (£64m). It comes off the back of a £12.6m round of investment raised in March.

Lynch's early-stage fund Invoke Capital made its first investments in Darktrace, of $10m and $20m, back in 2013.

The $1bn investment firm's only other announced cash injections were of cloud-based "recognition engine" Neurence and augmented reality app Tagger, both in 2013.

“We are delighted to be working with Summit Partners, an investor with deep experience in the security sector, as we continue to rapidly grow our business,” said Nicole Eagan, CEO of Darktrace. Eagan was chief marketing officer at Autonomy for seven years prior to joining Lynch as a partner at Invoke.

Darktrace currently counts BT, and a number of European card payment companies among its customers.

In 2014 the company expanded into the US market, boasting it has a number of Fortune 500 and mid-sized businesses apparently using its tech. ®