Intelsat to FCC: For the love of satellites, STOP ELON MUSK!

Claims SpaceX boss's birds could interfere with its own 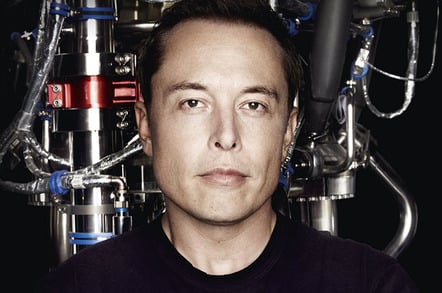 Elon Musk wants to use his commercial SpaceX rockets to put satellites into orbit that will bring broadband to the next billion, but one of SpaceX's own customers has thrown a wrench into the works.

Musk's plan involves encircling the globe with a few thousand high-capacity, low-latency satellites that the Tesla Motors boss says should be able to deliver broadband internet at speeds comparable to optical fibre.

But Musk isn't the only one with an internet-in-space scheme. Richard Branson-backed OneWeb has a similar idea, as does Luxembourg's Intelsat – and here's where things get dicey.

Musk needs a thumbs-up from the US Federal Communications Commission to put his satellites into orbit. But on July 9, Intelsat wrote a letter to the FCC asking that the agency block Musk's application for an experimental license, on grounds that the SpaceX founder is being too secretive about his plans.

That's a bit awkward, because besides being a SpaceX competitor, Intelsat is also a customer. In May, the two companies inked a deal to use SpaceX's Falcon Heavy rocket to put Intelsat birds into orbit. At the time, Intelsat said it would "work closely with SpaceX" as it readies the rocket for its first launch next year.

In its letter to the FCC, Intelsat said SpaceX's confidential filing with the agency simply doesn't disclose enough information about its plans to reassure other satellite operators that the experimental SpaceX satellites won't interfere with theirs.

"The information that SpaceX is seeking to withhold is the kind of basic information that is routinely, and publicly, filed by other satellite operators (both GSO and NGSO) in applications seeking FCC authorizations," the letter said.

Intelsat describes itself as "the world's leading provider of global satellite services," and it operates one of the world's largest fleets of geostationary satellites. Many of those devices are used in telecommunications, which explains why Intelsat would like to know the what, where, and how of how SpaceX's satellites will broadcast – information that SpaceX has so far withheld.

"The orbital parameters are needed so that if interference is detected by an Intelsat earth station, Intelsat either can identify or eliminate a SpaceX transmission as the cause," Intelsat wrote. "The fact that SpaceX is required to operate on a non-protection, non-harmful interference basis is of little comfort to [geostationary orbit] operators if the source of interference cannot be determined."

Moreover, Intelsat argues that SpaceX's assertion that the details of its plans are "proprietary information" is itself unsubstantiated and therefore invalid.

Intelsat isn't waiting around for SpaceX or the FCC to voluntarily release the information, either. It has simultaneously filed a Freedom of Information Act (FOIA) request that would compel the FCC to release SpaceX's confidential documents.

What impact this hurdle might have on the scheduling of SpaceX's space-broadband plans is unknown, and SpaceX was unavailable for comment at press time. ®