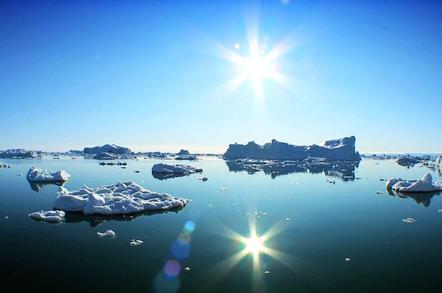 The Arctic ice cap has not, contrary to the predictions of climate alarmists, completely disappeared: in fact it has been growing rapidly, increasing by an entire third just in 2013 and more since.

"It would suggest that sea ice is more resilient perhaps. If you get one year of cooler temperatures, we've almost wound the clock back a few years on this gradual decline that's been happening over decades," ice scientist Rachel Tilling tells the BBC. The Beeb was reporting on newly published updated research which has confirmed the Arctic ice's remarkable resurgence over the last couple of years, for all that last year was tied for warmest-ever with 2005 and 2010.

The Arctic ice has indeed cheered up a bit, particularly in thickness of the key areas north of Greenland and Canada, which had been getting nearly as thin as the stuff north of Siberia - which regularly breaks up enough to let ships through, though they generally have to be escorted by icebreakers. Thus actual ice volumes are looking especially good.

Arctic ice has also stabilised in area, which is a marked change from much of last decade when the northern sea ice extent over time seemed to be in free fall. (That said the drop was much less than normal seasonal variation, as can be seen in these graphs from Cryosphere Today.)

Meanwhile of course, the southern sea ice around Antarctica has continued to spread out and cover bigger areas all the time, a circumstance which has frankly stumped climate scientists as their models cannot account for it. Antarctic ice hit a new all-time record last year, in fact.

This growth, combined with the recent bounce-back in the Arctic, means that the world's total area of sea ice today is little different to that seen thirty years ago and more, when people first started monitoring it.

But that's not changing many world views in the climatology departments.