Marshall wants to turn your phone UP TO ELEVEN 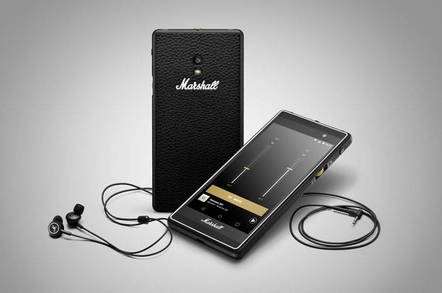 As long as it's black - the Marshall London smartphone

Fans of the Marshall look and sound can now carry it around in a smartphone.

The iconic guitar amplifier outfit''s headphones division managed something that Apple hasn't: it's developed a smartphone without having it leaked to a fan-site. So the launch of the London smartphone managed to catch the world somewhat by surprise.

Billed by Marshall as the “loudest phone on Earth” (perhaps), the London is due to ship in August.

Instead of on-board sound, it has a separate sound card that'll push music through front-facing “dual speakers using enhanced bass”, and since music enthusiasts are its natural market, there's a stereo noise-cancelling microphone for recording.

“The London is capable of crystal-clear playback of lossless FLAC files, giving justice to your old music files,” Marshall reckons.

Instead of a rocker switch, volume is controlled by a scroll wheel, and there are two headphone jacks so users can share music easily.

A system-wide equaliser means there's no need to adjust settings on different audio apps, and the "M button" provides single-button access to all music players installed on the device (including Marshall's pre-installed player).

As well as the company's signature black livery and famous logo, the scroll-wheel, M button and audio jacks are all brass.

Android Authority notes that as a smartphone, the London's specs are middle-of-the-road rather than bleeding edge: it's got a Qualcomm Snapdragon 410 with 2 GB of RAM, 16 GB of storage, a 2500 mAh battery, a 720 pixel 4.7” display, an 8 megapixel main camera and a 2 megapixel front camera, and it runs Android 5.0.