Or how the Marvel universe has jumped the SharkMan 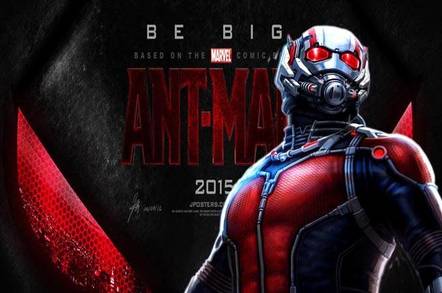 Film Review We were invited by Dolby to see a screening of Ant-Man at its custom-built screening room in San Francisco the other night. And so, of course, we went along.

The film is sound-mixed with Dolby's "Atmos" technology, which the high-end cinemas have and which basically allows you to place sounds in a theatre rather than have to decide which speakers to put the sound through.

The reason we say all this is not as a sop to the company for inviting us, but because the sound was so good that you almost didn't notice that Ant-Man is, well, not very good.

Sure, it looks fantastic (and we also had fancy 3D glasses rather than the cheap cinema ones so the image was pin-sharp and very involving). And yes, there are some great, fun actors in it (Paul Rudd, Michael Douglas, comic relief via Michael Peña). It's fast-paced. It has lots of booms and bangs, and comic interludes – what's not to love?

We predict a very healthy take at the box office. And that means, sadly, that we will have to suffer more and more of these Marvel cookie cutter blockbusting bullshit fests before the world finally tires of them, like Police Academy or The Matrix or, hang on, Planet of the Apes or Terminator [um, I think you're simply referring to Hollywood – Ed].

So, Ant-Man. The superhero you’d never heard of until earlier this year when you saw that Edgar Wright was directing a film about him. Edgar Wright?! Well, hang on then, this might be worth checking out.

Except, sadly, Edgar Wright is not directing, he just wrote the screenplay. Why? Because Wright was always going to be too ... inflexible, shall we say, to be allowed to touch the latest Marvel film-brick. You need someone who wants the directing credit more than they want to create a great film.

And so we got the man behind such creative tour-de-forces as cheerleader drama Bring It On and Jennifer Aniston dull-as-shit romcom The Break-Up, Peyton Reed.

Ant-Man very nearly worked. Wright's screenplay has a lot of fun with the superhero genre – as he has done with each of his films. In fact, it was most likely the fact that the idea of a man becoming incredibly small is so ludicrous in the role of a superhero that attracted Wright to it in the first place.

Unfortunately no one else seemed to have been let in on the joke. There is one moment right at the end that highlights how much fun this film could have been.

It is the final showdown between the baddie and hero, and it alternates between the ant-size view – where things are life and death – and the normal-size adult perspective – where it looks like the batteries in the toy set may have gone awry. It is very funny and engrossing, and it just makes you wish it had been introduced earlier – much earlier.