All the accessories you could want (but not a decent satnav)

The 36hp makes for a marked difference, and the lower power car, in top of the range lounge, trim costs £12,640 while a similarly specified 105hp model costs £14,420. The difference is more marked in the ones we drove because the higher priced one we took out was the most expensive car in the range, namely the £17,070 convertible; an eye-watering price for a small car.

The Fiat 500 has always had steering which is too light. The small engined car makes this worse with a “city” button. This over-assists the steering to make it toy-like and presumably is for the yummie mummies who have to negotiate Kensington, Monaco and the malls of Beverly Hills. Much better is the bigger engined car with the same button labelled “sport”. This does the opposite, increases resistance and gives more steering feel.

And so it is, slow and laggy. It changes its mind and sometimes we had to just wait for it to alight on a route which both we and it agreed upon.

More impressive is the optional, round seven-inch binnacle display. Pressing the sport button gives it a different theme (how long before themes are downloadable?), and it serves as speedometer, odometer and trip computer, while in the center you can flip between displays for distance travelled, instant fuel consumption, range, trip time.

There is a gear shift indicator for use when you’ve had to pay for your own petrol and rather nice graphics for doors open, temperature and the like. Not surprisingly, the 105hp car feels sprightlier. So much so it took reference to the spec sheet to confirm that, especially given that we were driving the convertible, it was 100kg heavier.

The weight however improves the ride. Over Turin roads which are as rutted and badly maintained as any in London, the cars both produced rather a cushy ride.

Get out of the city and onto some slightly better finished suburban roads and the fun starts to shine through. There is a bit more body roll than you’d like but the black 105hp is eager. The white 69hp is not. There is a little tyre noise and not enough engine note. Through tunnels the windows stayed resolutely shut. 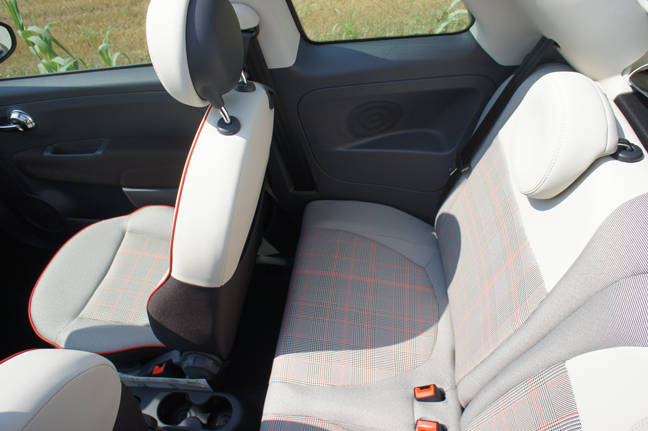 The seat design is great, with the round headrests suiting the character of the car, and there is a wide selection of trim options. The rear seat is fine for one person and bearable for two. On the Lounge version, the 50/50 back seat can be split and folded, although of course not if you have the convertible. With the seats up it’s 185 litres, 550 with it down.

Car manufacturers love the idea of on-going revenue, and there are only so many spare parts they can sell you, so many see digital content as the way forward. So Fiat has a radio screaming service called Uconnect TM, or the “next frontier of infotainment”. The car comes with a five-year subscription to the service and the Uconnect LIVE app can be downloaded from Apple Store or Google Play Store on a smartphone.

Next page: Made special by fashion
Page:
Tips and corrections
43 Comments

Microsoft promises to boil down its lengthy and confusing privacy controls… in 1,500-word announcement

Same day Zuckerberg declares with a straight face at F8 event: 'The future is private'