All the accessories you could want (but not a decent satnav) 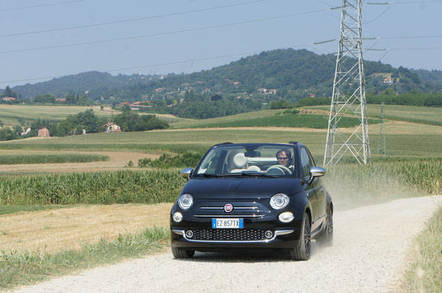 VULTURE AT THE WHEEL It’s all about the engines. Fiat has added new Euro 6 compliant engines to its line-up and this is the excuse the company has employed to call the facelifted 500 “new”.

It gets a bit of a nip and tuck in the form of a nose job. Lights slanted back a bit and LED running lights. Mani beam is still halogen or optionally Xenon, usually only very high end cars get LED all round, and this is a major factor in car design; even if a model offers LED it has to be designed to support the cheaper technology. 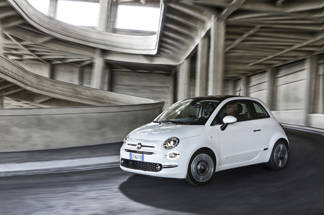 The Automotive botox has been extended to a new front grille and rear lights but in practice the “new” 500 is little changed from the existing model. This is, in the main, A Good Thing. The Fiat 500, revived in 2007, has been a hit, and the fizzy little twin air engines, particularly the 900cc Turbo, propel the thing with gusto.

Less good is the normally aspirated 1.2 FIRE engine, which puts out a rather pathetic 69hp. Not that power is everything, and it worth remembering that the 1950s Fiat 500 only put out 18hp, and yet is a hoot to drive (but then they only weigh 500kg).

The new 500 tips the scales at 895kg for the lightest version and 980kg for the one with the heaviest engine and a convertible roof. We drove cars with both engines; white one had the 1.2 and the black the 105hp version of the 900cc.

But the car is principally about fashion. There is an array of interior finishes: Pop, Popstar and Lounge and a wide selection of colours which can be supplemented with a set of factory-applied graphics, which Fiat calls 'Second Skin'.

There is the “Small” version, featuring a geometric, trendy pattern along the belt line, while the “Medium” solution includes pillars and roof – and in some cases also the bonnet and tailgate – with four patterns: 'Lord' (classic tartan), 'Comics' (pop decoration, in combination with the new two-colour body paintwork), 'Navy' (akin to Cobra stripes and not a dark blue) and 'Camouflage' (more mottled than military).

There are 13 body colours, including the new Corallo Red and Opera Burgundy; eight alloy rims, 15” and 16”; and ten different interior configurations. 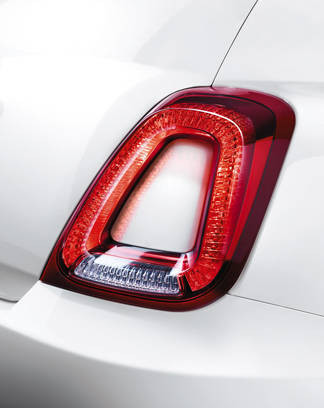 New design of rear light shows body inside a loop

Offering a combination of designs and colours means that you can be sure that whatever the customer wants won’t be what’s in the showroom when she wanders in, so it will have to be ordered, but it's great for margin.

A long time ago the car industry twigged that selling things which cost almost nothing to do – like painting the brake callipers a special colour or changing the stitching in the seats – can be hugely lucrative.

The Fiat presentation, in the Lingotto, the former Fiat factory in Turin with a test track on the roof, claimed that the car was new, rather than a facelift; as much a man’s car as a woman’s.

This might be true if Fiat had launched an Abarth version and the firebreathing Biposto. The factory is very cool. We weren't allowed to drive on the roof, but did take the cars there while humming “It's Caper Time”

Next page: As for the steering, well, erm...
Page:
Tips and corrections
43 Comments