Happy NukeDay to you! 70 years in the shadow of the bomb post-Trinity

Top nuke boffin calls for new test, but not for the reason you'd think

From pasture to plutonium

Dr Brownlee, now 91 and living in Colorado, was born on a farm in the Kansas prairies, which sparked an early interest in explosives.

During dry summers his father would use a few sticks of dynamite to blast down to the water table so that the cattle could drink from the resulting pool, and the young man started making mathematical calculations about how much explosive would be needed to move large quantities of soil.

"I was also fascinated by the Sun and wanted to know how it worked," he said. "Little did I know that I'd later be working at Los Alamos with Hans Bethe, who won the Nobel Prize for working out just that. It was amazing to me that I could just look over the table in the lab and ask him a question."

Brownlee gained a degree in astronomy and astrophysics at the University of Kansas and served on a B-29 bomber in the Pacific during World War Two. Flying above the ceiling of Japanese Zero fighters, Brownlee observed how the different layers of the atmosphere affected falling bombs, which would prove important in his later work.

His scientific skills and curiosity, and a love of explosions, brought Brownlee to the Los Alamos National Laboratory. The pace of research into nuclear devices was frenetic – the Soviets had developed fusion and fission bombs much faster than expected, in part through espionage, and the US was keen to explore the full potential of this new weapon.

Back then Los Alamos was a hub of the brightest minds in the physical sciences. Hans Bethe was not the only Nobel Prize winner on site, and Brownlee remarked that you could converse with some of the best scientific minds of the generation, within limits.

"At Los Alamos no one discriminated on the ground of where you came from, or if you were a Christian or a non-believer," Brownlee explained. "The only thing they discriminated against was to be dumb – and it was a top priority to show you weren't."

Why we need testing still

The 1957 nuke that may have launched an object into space was a comparatively small bomb and was around the size envisaged for the M-28 or M-29 Davy Crockett handheld nuclear device. But Brownlee witnessed many nuclear tests in his time at Los Alamos and they convinced him, and many others, that bigger was not better.

The first nuclear devices exploded over Japan were fission systems, and pathetically inefficient ones at that. Very little of the bomb material was converted into energy, but the Los Alamos team refined the physics and engineering to build ever more powerful explosive devices.

In 1954 the US exploded a thermonuclear device on Bikini Atoll in the South Pacific. The Castle Bravo device remains the largest bomb ever exploded by the US, although it wasn't a bomb so much as a small chemical factory. It was expected to produce around a five megaton explosion, but miscalculations tripled that energy output. 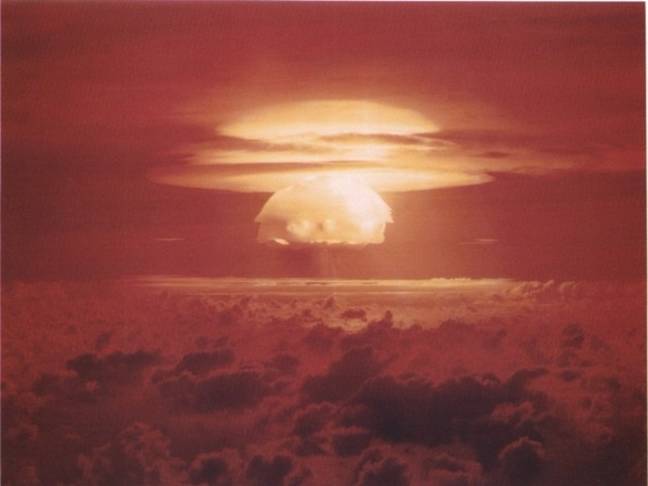 Within a second of the bomb going off, a fireball 4.5 miles wide burst over the atoll and sixty seconds later the mushroom cloud hit 130,000 feet, spreading radioactive material over a huge area. It was an unexpected but life-changing explosion – not least for the Pacific Islanders who were dusted by the fallout.

It is the power of thermonuclear devices that convinced Dr Brownlee that test explosions should be resumed and held regularly with the world's politicians watching the spectacle first hand. Once you have witnessed something that powerful, he explained, it would make it highly unlikely that such destructive devices would ever be used in anger.

"Historically I'm probably the last person alive to see a thermonuclear explosion with my naked eyes," he said. "The last explosion was a long time ago but for those that actually saw it, we all had the same experience, which was to turn us into peaceniks." ®