It's got a Sun and a Jupiter. What's not to like? 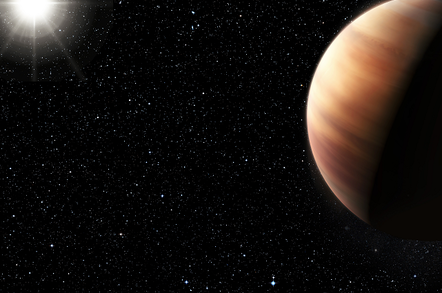 There are hundreds of known exoplanets - worlds in orbit around other stars than our own Sun. The trouble is, because of the means used to detect them, that they tend to be big and very close to their faraway suns - and thus, sadly, not potential Earthlike habitable worlds. But that may have changed today.

Excited astronomers say they have found a massive gas-giant world, almost a twin to our own Jupiter, orbiting a very Sun-like yellow star with the groovy codename HIP 11915. This star, which can't be seen by the naked eye but which is visible using binoculars, lies 186 light-years away in the constellation Cetus ("the Whale").

That doesn't sound terribly exciting: but it is, because it means – according to current theories of planetary formation – that HIP 11915 is likely to have smaller rocky planets closer in, much as our own Sun does. Such planets would be much more like Venus and Mars – or better still, Earth – than most known exoplanets are.

“After two decades of hunting for exoplanets, we are finally beginning to see long-period gas giant planets similar to those in our own Solar System," enthuses astroboffin Megan Bedell of Chicago uni, one of the discoverers of HIP 11915. "This discovery is, in every respect, an exciting sign that other solar systems may be out there waiting to be discovered.”

Bedell and her colleagues detected the far-out gas giant using the High Accuracy Radial velocity Planet Searcher (HARPS) instrument attached to the mighty 3.6m telescope of the European Southern Observatory's La Silla facility, in the high Atacama Desert of Chile. HARPS spied out the gas giant by detecting the slight wobble it imposes on HIP 11915 as it swings around the star.

The HARPS method isn't perfect - Bedell and her crew admit outright that there is some chance that the variations in HIP11915's output which they think indicate the gas giant's presence may just be a normal part of the star's behaviour. But the good thing about this means of finding exoplanets, as opposed to the more conventional one of watching to see them pass in front of their stars, is that it can more easily find planets which are further out from their primaries.

This in turn means a better chance of finding solar systems laid out more like ours, where the big detectable planets are all in the outer system not the inner. If the astroboffinry world has got its ideas on planetary formation right, it is these systems which are most likely to yield up the long-sought new Earths with their possible habitable environments, alien life, colonisation possibilities etc.

“The quest for an Earth 2.0, and for a complete Solar System 2.0, is one of the most exciting endeavors in astronomy," says Jorge Menendez of the Universidade de São Paulo, another of the boffins involved in the discovery. "We are thrilled to be part of this cutting-edge research."

Full boffinry detail will appear the paper The Solar Twin Planet Search II. A Jupiter twin around a solar twin”, M. Bedell et al., in the journal Astronomy and Astrophysics. ®