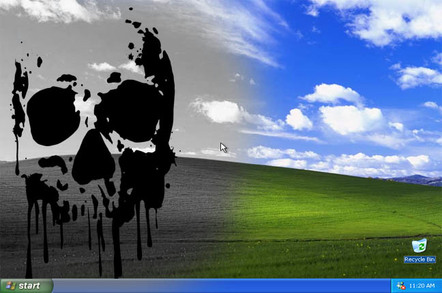 Windows XP holdouts are even more danger than ever after Microsoft abandoned anti-malware support for the ancient platform.

The run-as-needed Malicious Software Removal Tool has also been axed, while support for patching ended in April last year for those who aren't paying large wads of cash to stave off an upgrade.

"Please note that since the above real-time protection products have limited effectiveness on PCs that do not have the latest security updates, your PC will still be at risk for infection," Redmond says.

"We strongly recommend that you complete your migration to a supported operating system as soon as possible so that you can receive regular security updates to help protect your computer from malicious attacks."

Most remaining XP users are based in Pakistan and Egypt, and have also this month lost use of Java after Oracle pulled support making XP a true all-you-can-p0wn smorgasboard for net villains.

In the most recent Redmond statistics, published last year, Microsoft security bod Tim Rains said Windows XP was a cracking six times higher than Windows 8 and double that of the most popular Windows 7.

"Of course we wish Microsoft decided to support the XP platform for a longer period given its commercial success, but since things didn’t play out that way, it’s important for users to know that if they don’t move away from XP they stand to lose financial resources, personal information, and critical professional files," Zaharia says.

"From now on it will be easier than ever for cyber criminals to find vulnerabilities and penetrate the XP platform without being noticed.

"And we can say with certainty that no user can afford to take those risks." ®