Commodore PET lurches out of its 1970s grave – as a phablet 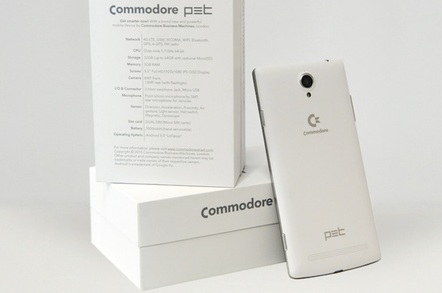 Video The Commodore PET, a beloved micro-computer of the late 1970s, is coming back - as an Android phablet. A new website, Commodoresmart.com, has appeared to spruik the device which offers a 5.5 inch screen at 1920x1080, 8MP front and 13MP rear cameras, an eight-core CPU, 3GB of RAM, Android 5.0 and the chance to use two SIMs for LTE connections.

The PET debuted in 1977 in a form factor that would today be be called an “all-in-one” as the monitor, keyboard and – in some models – cassette drive were all housed in one chassis. A 6502 processor buzzed along at one megahertz inside, graphics were monochrome (and usually green-screen) and delivered 40x25 character display. Machines shipped with either 4K or 8K of RAM.

Those specs may not inspire, but by the standards of the day the PET was well-configured and well-behaved. Commodore expanded into cheaper, colour, computers aimed at the home and scored solid hits with the VIC-20 and Commodore 64. Next came the Amiga, complete with a multitasking operating system and windowing GUI at a time both were a novelty.

Commodore hoped the Amiga would find a home on business desktops, but its predecessors had mostly ended up as gaming machines and the company struggled to shake off that tag. IBM's growing PC business didn't help Commodore's business plan and it eventually sank after many millions of sales and also all manner of legal and corporate strife.

The Commodore brand refused to die, thanks to loyal Amiga fans and plenty of happy associations with products that were an on-ramp to computing for many.

The folks behind Commodore-Smart say they've tidied up all the necessary legals, so can use the brand and offer emulators for the Commodore 64 and Amiga in their new handset. Old games from both platforms will reportedly be accessible once the hardware makes its scheduled debut later this week.

The vide below shows the Amiga emulator in action.

The phone will reportedly cost US$300 for the basic model, with punters in Italy, France, Germany, and Poland offered the chance to buy and the rest of us told to cool our heels for a while. ®