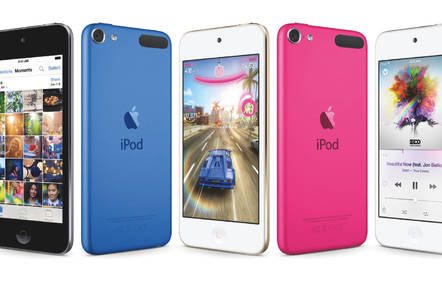 Pic Apple has whipped out a new iPod Touch model with an eight-megapixel camera, a new processor, and more case colors.

The iPhone-without-the-phone gizmo – which many assumed would be killed off by Apple – will now come in space gray, silver, gold, pink, or blue. It will also use Apple's A8 ARM-compatible CPU, which first appeared in the iPhone 6.

"With big advancements like the A8 chip and the 8 megapixel iSight camera, customers can experience next-level gameplay, take even more beautiful photos, and enjoy their favorite music, TV shows and movies."

The new iPod Touch will be offered through both branded Apple Stores and resellers in 16, 32 and 64GB capacities, with prices ranging from $199 to $299. Apple is also offering a special $399 128GB model for sale in Apple Store locations and through its online store.

Apple made a point of noting that the new iPod Touch would support the Apple Music service. Launched earlier this month from the remnants of the Beats Music service, Apple Music sells as a $9.99 monthly service with the first three months free. A Register review found the service to be nothing special, but users who want to dump spotify and tie their streaming music into their stored libraries could be tempted to sign up.

Once a primary source of Apple's income, the iPod has fallen out of favor these days as users moved from dedicated media players to smartphones. Apple's last quarterly report relegated iPod to an "other products" category that brought in just $1.68bn of revenue, compared to $40.2bn from the iPhone line. ®