US yoinks six Nigerians to Mississippi on '419 scam' charges

Not a prince among ‘em 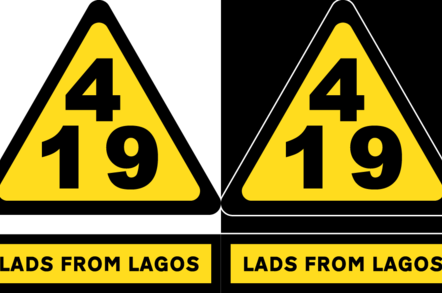 The US Department of Justice has successfully extradited six Nigerians from South Africa to face charges of running a series of scams against gullible Americans over the past 14 years.

The indictment [PDF] states that since 2001 the accused, one of whom is 75 years old, were part of a string of scams against Americans, facilitated by internet communications. These include the longstanding 419 scheme, whereby a massive windfall is promised once a small number of payments have been provided, but the DoJ claims it went much further than that.

Almost none of the amounts of money scammed were more than four-figure sums, according to the indictment, but those add up over the years. It's estimated that billions of dollars have been shipped overseas to the African subcontinent by various organized criminal gangs over the past couple of decades.

The DoJ is still waiting for four more of the alleged team at the Nigerian end of the operation to finish the extradition process. Two more, Gabriel Oludare Adeniran and Oduntan Sikiru Lawani, remain on the run. ®